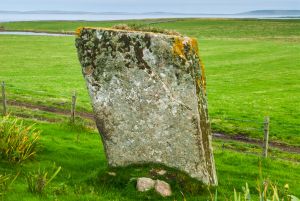 Yetnasteen Standing Stone
A solitary standing stone measuring over 7 feet in height. Unusually, the stone stands at the bottom of a hill, rather than in an exposed, elevated position where it might more easily be seen. Legend tells that on New Years Day the stone walks down to the nearby loch to drink.

With Yetnasteen that old saying that 'getting there is half the fun' is true! Though the path is signposted, it really does help to have a good Ordnance Survey map along to make sense of the field boundaries and the direction you're supposed to be heading.

The name of the stone derives from Old Norse 'Jotunna-steinn', meaning 'Giant Stone', and when you see Yetnasteen it is easy to see why it was so named.

When you get close to the stone it doesn't at first appear all that impressive; it is only when you stand beside it that you realise just how tall it is, and how large and heavy the stone. It must have been an extremely difficult task to set the stone in place. 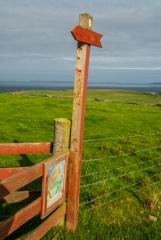 Getting there is half the fun! 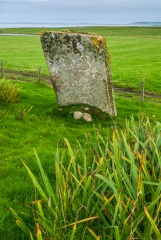 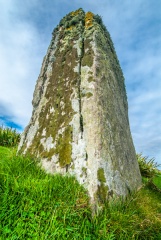 The stone from the side 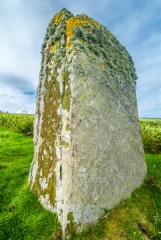 And from the other side! 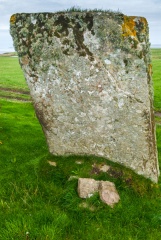 Tower of London at Night

Nearby accommodation is calculated 'as the crow flies' from Yetnasteen Standing Stone. 'Nearest' may involve a long drive up and down glens or, if you are near the coast, may include a ferry ride! Please check the property map to make sure the location is right for you.

Arden Guest House is situated in Kingussie in the heart of Cairngorm National Park . Set in its own garden grounds with a large private car park, the house is a lovely example of a Highland Victorian Villa. It retains many period features and has been sympathetically refurbished and creates … more >>