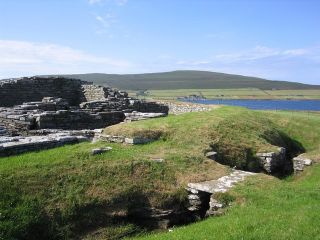 Cubbie Row's Castle
Cubbie Row's Castle is one of the earliest stone castles to survive in Scotland. It was built around 1145 by the Norse lord of Wyre. The castle is a small rectangular tower, and within the castle enclosure is a ruined 12th-century chapel.
History
what's in a name? Around 1145 the Norse lord Kolbein Hruga built a 'steinkastala' or tower on the island of Wyre, off Rousay, defended by a circular earthen ditch and bank. The name Kolbein Hruga was later transformed into Cubbie Row, or Roo.

If the dates are correct that makes Cubbie Row's Castle the earliest stone castle in Scotland, predating Castle Sween in Argyll.

The defensive ditch has been excavated and appears to be about 5'9" wide at the base and 6 feet deep. The ditch enclosed an area of just 75 feet by 95 feet long. Within the outer ditch a second ditch was dug down through the rock to create an inner platform about 48 by 54 feet.

The castle ruins stand 8 feet high, roughly 26 feet square, and about 5'6" wide at the base. It was built of undressed flagstones. The ground floor, which is all that remains, probably contained a storehouse and well chamber, and we can assume that the main entrance was on the first floor. The tower was later extended to form an L-shape, and there are ruinous remains of later extensions and a ruined hall outside the tower.

St Mary's Chapel
Later in the 12th century Row's son Bjarni, later Bishop of Orkney, built a chapel within the encircling castle wall. The chapel is composed of a rectangular nave linked to a chancel through an arched opening. A pair of windows survives, as does a section of plastered wall.

The Hakonar Saga suggests that Cubbie Row's Castle was besieged in 1231.

The castle and chapel are cared for by Historic Scotland, and are open at any reasonable time, which is not surprising seeing as you have to take the ferry from Kirkwall to get here, and there really isn't anything else to see on the island! For more information contact Historic Scotland at the Skara Brae site.

Nearby accommodation is calculated 'as the crow flies' from Cubbie Row's Castle. 'Nearest' may involve a long drive up and down glens or, if you are near the coast, may include a ferry ride! Please check the property map to make sure the location is right for you.