HERITAGE HIGHLIGHTS:   One of the oldest houses in Europe 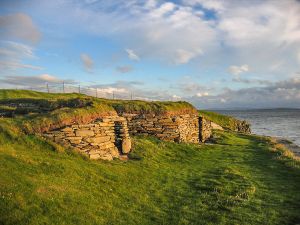 Knap of Howar
A pair of remarkable early Neolithic stone houses stands at Knap of Howar. The houses feature stone cupboards and stalls and are believed to be the oldest houses in this region of Europe.
The dwellings at Howar were only revealed after coastal erosion revealed a midden heap and a glimpse of stone walls. It took an enormous effort by archaeologists, who had to shift over 2 metres of sand before the two stone buildings were laid bare.

Historic Scotland bills the Knap of Howar as the oldest stone dwellings in north-western Europe. The houses date to the early Neolithic, before the famous stone village at Skara Brae, and at roughly the same period as the numerous chambered tombs that are scattered around Orkney. Radiocarbon tests suggest that the Knap of Howar was occupied from around 3600 BC to 3100 BC.

The site at Howar consists of two oblong buildings with extremely thick stone walls. Both buildings have very low entrances, both facing towards the sea. One of the buildings is larger and is linked to the smaller structure by a low stone-lined passageway, suggesting that the smaller building was a workshop, added onto the dwelling at a later date. Though the buildings are now close to the shore, when built they would have stood well inland.

The walls are over 5 feet high, and inside are beds, storage areas, fireplaces, and internal screens, all made from stone slabs. Remains of post holes show the pattern of timber supports used for the roof. There was a central fireplace, so presumably smoke from the fire would have simply risen straight up through a hole in the roof. There s a low stone bench around the wall of the outer chamber. The inner chamber was presumably used as a kitchen, and remains of two querns for grinding grain were found on the floor.

The smaller 'workshop' hut was divided into 3 sections by stone slabs. There were 2 entrances; one from the long end of the structure and the other directly through the shared wall with the farmhouse. Both entrances were blocked, suggesting that the workshop fell out of use at some point.

Excavation of the midden heaps outside the buildings shows that the people who lived at Howar kept pigs, sheep, and cattle, gathered shellfish, and grew barley and wheat. Archaeologists have discovered sherds of Unstan ware pottery, named for the chambered cairn on Orkney Mainland.

So what was Howar? Probably a small, isolated farm, with the larger building acting as the farmhouse, linked to a combination workshop and barn. The houses appear to have been built upon an older midden, suggesting that the early Neolithic buildings we see today were merely the newest structures on a site with a long history of habitation.

The Knap of Howar can only be reached by ferry from Kirkwall. It is managed by Historic Scotland and is an open site.

Nearest Accommodation to Knap of Howar:

Nearby accommodation is calculated 'as the crow flies' from Knap of Howar. 'Nearest' may involve a long drive up and down glens or, if you are near the coast, may include a ferry ride! Please check the property map to make sure the location is right for you.

More self catering near Knap of Howar >>

More Hotels near Knap of Howar >>

More bed and breakfasts near Knap of Howar >>