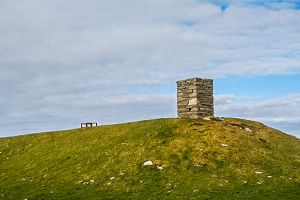 There are actually 3 chambered cairns of the island.

The South Cairn
The south cairn is easily the more impressive and well-preserved of the three. It is roughly 115 feet long, on a SW-NE axis. It stands 10 feet high and about 55 feet across, and is about 70 feet from the cliff edge.

Inside is a central passage which is 65 feet long, with 5 cells arranged on both sides, facing each other. Two of these cells are double-sized and all are in remarkably complete condition. The chambers were originally 9 feet high and over 2.5 feet wide, topped with heavy stone lintels. The entire cairn was surrounded by a stone wall 2-3 feet high, and the interior floor was of sand laid on top of clay.

The central passage flanked by side chambers is similar to the narrow 'street' at Skara Brae, suggesting that the cairn was seen as a house, or dwelling for ancestors, with the style of the burial cairn intentionally built like a house.

The Carvings
One of the most interesting features at Holm of Papa Westray is a group of carvings on the south east wall of the central chamber. The carvings include circles, dots, and a double ring symbol. On a lintel over a cell entrance are a pair of strange 'eyebrow' symbols; a pair of curved lines above dots for eyes. These are similar to the marking on the so-called 'Orkney Venus' discovered at the Links of Noltland on Westray in 2009. On the same stone is a peculiar carving that looks very much like the letters EAYU. On the opposite wall are circles and zig-zag symbols. 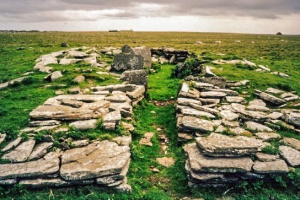 The north cairn (c) Adam Ward
Access for modern to the cairn is through a hatch in the roof, but the original entrance was a long, narrow passage. There are torches inside for visitors to use. The entire cairn has been turfed over for preservation, and a concrete roof built.

The cairns on Holm of Papa Westray date to about 3000 BC. Though much less sophisticated in architecture, the style is similar to the 'ship of the dead' cairn at Maes Howe on Rousay.

The site was excavated in 1849 and no human remains were found, which does seem odd if the cairn was intended as a communal burial site. A small amount of animal bones were discovered.

The Northern Cairn
By contrast to the south chambered cairn, the north stalled cairn on Holm of Papa Westray is open to the air. This does have the advantage of making it very easy to see how the cairn is divided into ccells by upright slabs. An entrance passage at the north end of the cairn runs almost 10 feet, and ast the far end of the central chamber is a small cell just over 3 feet wide. It seems that this cairn was intentionally 'decommissioned' at some point; the top was taken odd, and the interior filled with dirt and stones. When the cairn was excavated sherds of Unstan ware pottery were found, along with deer antlers, human bones, and animal bones.

The third burial is on the south west side of the island, though it is sometimes called 'Holm of Papa Westray Centre'. It is by far the least interesting of the tombs, consisting of a 32 foot diameter mound, rising about 2 feet. The stubs of 3 upright slabs, possibly walls of an inner chamber, stick up through the turf in the centre of the mound. Other nearby stones may be part of a kerb, or revetment wall. This cairn has never been excavated, but it seems reasonable to think it was part of the same system of beliefs that led Neolithic settlers to bury their dead in the other two remaining tombs.

Getting There
Like most of the historic sites on the minor islands of Orkney, the Papa Westray chambered cairns can only be reached via private boat hire, in this case from the nearby island of Papa Westray. See the Historic Scotland website for full details or enquire at the Co-op shop.

Nearby accommodation is calculated 'as the crow flies' from Holm of Papa Westray Chambered Cairn. 'Nearest' may involve a long drive up and down glens or, if you are near the coast, may include a ferry ride! Please check the property map to make sure the location is right for you.

More self catering near Holm of Papa Westray Chambered Cairn >>