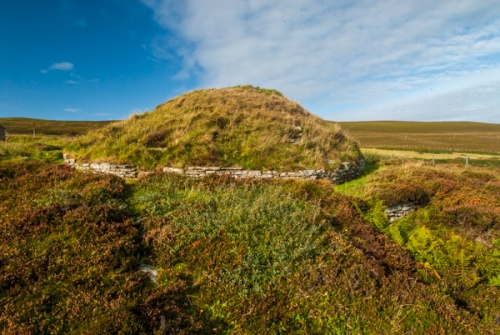 Taversoe Tuick Chambered Cairn
Taversoe Tuick is a very unusual two-storey Neolithic chambered mound with two burial chambers, one on top of the other. This type of tomb has been found in only one other location in the Orkneys. There is a smaller, third chamber, outside the lower chamber. Taversoe Tuick was built about 5000 years ago and only rediscovered in 1898 when the local laird was having a summer seat built for his wife. 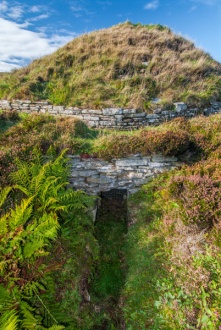 Both the upper and lower chambers were accessed independently. The lower chamber had an entrance passage leading from the south side of the cairn. The chamber is subdivided into 4 parts by stone slabs. Each of these 4 compartments had its own set of stone shelves built into the walls. A crouched skeleton was found on one of the shelves, and 2 other skeletons in the chamber. In addition, there were 3 pies of cremated bones in the blocked entrance passage. Quite how many people these cremated ashes represented is unknown.

As for the upper chamber, this was originally entered by way of a passage from the north, that is, in roughly the opposite direction from the entrance passage to the lower chamber. Within this chamber were the cremated bones of one adult and one child.

The smallest, or miniature tomb chamber, was divided into 4 compartments and is slightly pear-shaped. Remains of three pottery vessels were discovered inside this chamber, but no apparent skeletal remains.

I loved Taversoe Tuick; it gives a whole new meaning to 'upstairs, downstairs!' The upper chamber is interesting, but being able to descend the metal ladder to the lower chamber felt like going down into the depths of the earth, though the ladder is not high at all! It gave the sense of climbing down through the centuries.

In the lower chamber you can easily see the shelves built into the walls of the small compartments.

The location of Taversoe Tuick is superb, with views across to Orkney Mainland and down to the ferry terminal. I mention that last point because Taversoe Tuick was our final stop on a wonderful day-trip to explore ancient sites on Rousay, and we could see from the cairn when we had to make a desperate dash to catch the ferry back to Orkney Mainland! 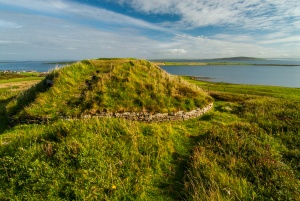 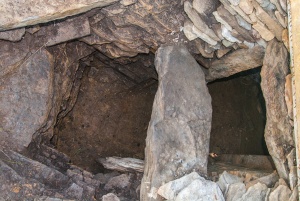 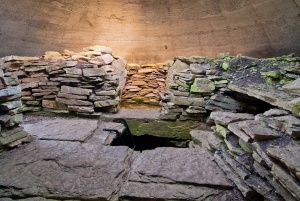 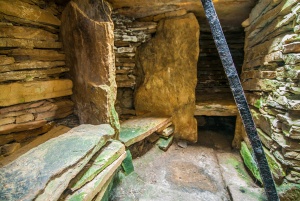 The lower chamber with its stone shelves

Nearby accommodation is calculated 'as the crow flies' from Taversoe Tuick Chambered Cairn. 'Nearest' may involve a long drive up and down glens or, if you are near the coast, may include a ferry ride! Please check the property map to make sure the location is right for you.