HERITAGE HIGHLIGHTS:   Site of the 7th century synod which effectively ended Celtic Christianity in the north of England 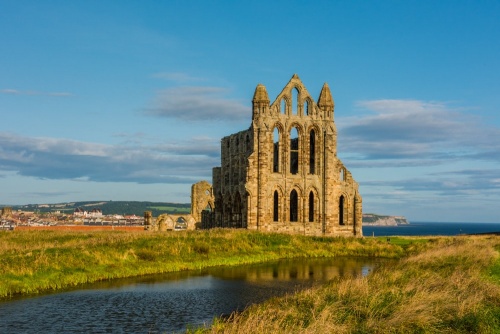 These Early English abbey ruins are the site of Count Dracula's (fictional) landing in England. More importantly, Whitby was the location of the 7th-century synod of early bishops which established the supremacy of Roman Catholicism over the Celtic church in Britain.

The headland east of Whitby harbour was occupied as early as the late Bronze Age. Remains of a circular hut within an earthwork enclosure have been unearthed near the clifftop. The Romans probably established a signal station here in the 3rd century AD, part of a network of such stations that included Goldsborough to the north and Ravenscar to the south.

After the departure of the Romans they site was unoccupied until a large Anglian community grew up in the 7th century. The community was known as 'Streaneshalch', which translates loosely as 'Streane’s headland'.

Sometime around AD 657 a woman named Hild (614–80), the daughter of an Anglian nobleman, founded a double monastery (a monastery acting as home to both monks and nuns) on the cliffs above the natural harbour of Whitby. Remains of the 7th-century foundations have been found to the north of the ruined abbey church we see today.

One of the monks at Streaneshalch wrote a biography of Pope Gregory the Great in the mid 7th century, and this document gives us a glimpse into the monastery itself. A lay brother at Streaneshalch was Caedmon, the first recorded poet in the English language.

Hild, later to become St Hilda, was supported in her new monastery by Oswiu, the Anglian King of Northumbria. The royal support continued under later monarchs and several members of the Northumbrian royal family were buried at St Hilda's monastery.

St Hilda's life was recorded by the 8th-century historian The Venerable Bede. According to Bede, Hilda was the great-niece of the Northumbrian king, Edwin. When her father was murdered she and her sister Hereswith were raised in Edwin's royal court. She became a nun at the age of 33 and served as an abbess at Hartlepool before founding her famous monastery at Whitby. Hilda and her monastery were so highly respected that kings and princes sought her advice. 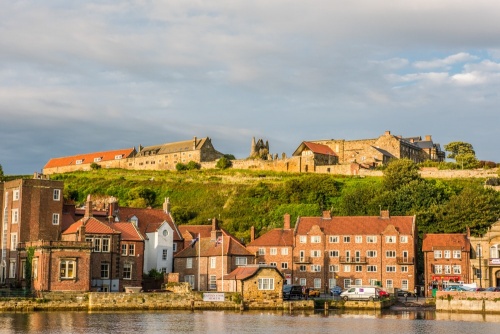 Whitby Abbey from the harbour

The Synod of Whitby

Given Hilda's reputation, it comes as no surprise that when a synod was called in AD 664 to reconcile differences between the Celtic and Roman strains of Christianity it was held at Hilda's monastery in Whitby. On the surface the question before the synod was simple; on what date should Easter be celebrated? Celtic Christian tradition calculated the date of Easter differently than Roman tradition, and the Synod of Whitby was to determine which tradition to follow.

In fact, the Synod of Whitby was effectively making a choice that would determine the direction of Christian worship as a whole. Hilda herself favoured the Celtic tradition, but the ultimate arbiter was Oswiu, her patron and King of Northumbria. King Oswiu opted for the Roman tradition, a decision which altered the course of English history as it cemented the Pope's authority over the Church in Britain until Henry VIII broke that influence almost 900 years later.

Both the monastery and the settlement at Whitby were abandoned in the 9th century, probably as a result of Viking raids. A new settlement was established by the harbour at the base of the cliffs, and this settlement became known as Whitby. The headland seems to have been deserted completely until 1078 when the Saxon monastery was re-founded as a Benedictine priory in 1078 under a monk known as Reinfrid.

The new monastery later split into two distinct communities, one at Whitby and one at St Mary's Abbey in York. The Whitby monastery may have reused the Saxon ruins on the headland or built new timber buildings atop the earlier buildings. The first stone building was the church, built around 1100. The monks also built a parish church for the civilian settlement.

In the 12th century the priory was raised to full abbey status. The church was largely rebuilt in the first half of the 13th century, beginning around 1225. Only part of the large new church was built before the money ran out. Work resumed over a century later and was finally completed in the 15th century.

Whitby Abbey was suppressed by Henry VIII in 1539. The monastic buildings south of the church were completely destroyed, leaving little trace above ground. The site was acquired by Sir Richard Cholmley, who transformed the abbot's lodging into a residence known as Abbey House. A descendant, Sir Hugh Cholmley I, was a Royalist supporter in the Civil war and as a result Parliamentary soldiers captured and ransacked Abbey House. After the war, Sir Hugh's son, also named Hugh, restored the house and added a new wing known as the Banqueting House. He also designed the entrance courtyard that we see today. The Cholmley family abandoned Abbey House in the 18th century. 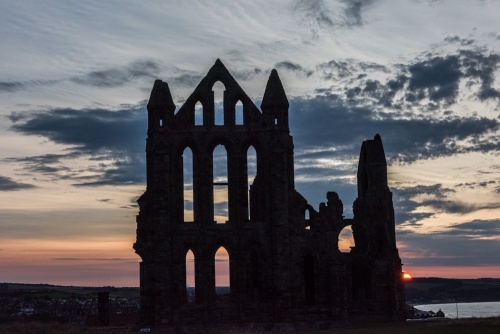 The abbey church was left to decay, becoming a romantic clifftop ruin. During the 19th century, Whitby became a busy resort destination and the abbey was a popular destination for tourists. The abbey's popularity was assured in 1897 with the publication of Bram Stoker's novel Dracula, which uses the abbey as a setting for the opening scenes.

Stoker was a theatrical agent for actor Henry Irving, and also a writer. He came to Whitby in July 1890 for a break from his job, and with the germ of an idea for a Gothic novel in his head. The setting of Whitby Abbey , perched on its picturesque headland, fit perfectly with the tale evolving in Stoker's mind. He explored St Mary's churchyard and noticed the decaying graves near the cliff edge. He noted down names and inscriptions on the gravestones for later use.

He visited the public library and read an account of the British Consul to Wallachia and Moldavia retelling the story of a 15th-century prince named Vlad Tepes but known locally as Dracula, the 'son of the dragon'. During his stay in Whitby Stoker heard the story of the Russian ship Dmitry, which ran aground in 1885 below East Cliff, carrying a cargo of silver sand. The Dmitry became the Demeter, carrying Dracula to Whitby with a cargo of silver sand.

It took Stoker another 6 years to weave together the strands of the story inspired by his stay in Whitby. The tale was first published as a play titled The Undead, with Henry Irving in the lead role. Irving played the role only once before vowing to have nothing more to do with it. Undaunted, Stoker reworked the script as a novel in the form of letters, newspaper stories, and entries in the ship's log of the mythical Demeter. It is no accident that in the finished novel the Demeter runs aground at East Cliff on 8 August, the very day that Stoker first read the story of Vlad Tepes in Whitby's public library.

Today there are regular Dracula-themed events at Whitby Abbey.

As for the superb remains of the abbey church, the north wall of the north transept still stands to its full height, rising in three tiers to a huge rose window. The east and north walls of the chancel are almost complete and show wonderful Early English style arcading. The west end of the nave is different in style, showing the transition from earlier lancet windows to pointed window openings with elaborate tracery.

Very little remains of the other monastic buildings that would have occupied the cliff-top site. Abbey House is now home to a museum about the abbey, with displays of archaeological finds on the headland, including remains from the early Anglian settlement, medieval gargoyles and pre-Norman crosses.

Just below the abbey on a terrace set into the hillside is the 12th-century church of St Mary's (sometimes called 'The Dracula Church' because it featured in Bram Stoker's novel). Below the churchyard, a long, very steep set of 199 stairs leads down the sloping hillside to the town and historic harbour.

I've been to the Abbey numerous times, and each time I'm struck by the sheer beauty of the site. There are other medieval monasteries with more complete remains, but I doubt any can outdo Whitby for the sheer beauty and drama of the location.

There are really two ways to visit the abbey site. You can climb the famous 199 Steps that lead from the harbour area to St Mary's churchyard, just below the abbey. Alternatively, there is a large pay and display parking area on Abbey Headland. The parking area is very well signposted from nearby roads and provides level access to the abbey. 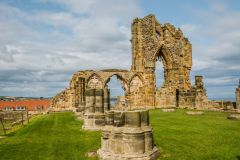 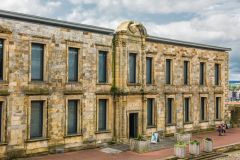 More self catering near Whitby Abbey >>