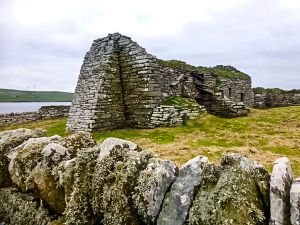 Eynhallow Church
The ruins of a 12th-century monastic church stand on the uninhabited island of Eynhallow, off Rousay. Eynhallow Church was used as a dwelling from the 16th century and was only discovered by accident.
History
The small island of Eynhallow stands just between Rousay and Mainland. Its name comes from the Old Norse Eyin Helha, or Holy Island. There was probably a monastery here in the early 12th century. The Orkneyinga Saga tells how the ward of Kolbein Hruga (the builder of Cubie Row's Castle) was kidnapped from the monastery in 1155. Presumably, the young man had been sent to Eynhallow to be educated by the monks, who may have followed the Benedictine rule.

The Holy Island
A fanciful tale relates to Eynhallow; according to local folklore, the island was the summer home of the magical Finfolk and was taken from them by the Goodman of Thorodale, who drove off the Finfolk and cleared the island of enchantment by sowing nine rings of holy salt around it. After this was done a church was built on the island, which was thereafter called Holy Island.

The story of how the church was discovered is just as dramatic as the story of the Goodman of Thorodale. The monastic buildings were converted to In 1851 there were just 4 cottages on the island. The residents fell ill - perhaps because their water supply was drawn from an old midden - and were evacuated for their own safety. The cottages were fated to be dismantled so they could not be used again. When the roof was pulled off one of the cottages the structure of the medieval church was revealed.

What to See
Though the church was significantly altered during its transformation into a dwelling, many of the original monastic features can be easily seen. There was a porch at the west end of the building, leading to a rectangular nave, and on to a square chancel. The best-remaining features of the church are the porch walls, gables in the nave, and the base of the chancel walls.

There are doorways in the west and north, and a round-headed doorway arch into the nave. The west porch may have served as a base for a tower. One curious feature is a large number of red sandstone carved fragments discovered in an outbuilding. These are similar to carved stone at St Magnus Cathedral, in Kirkwall. Sandstone does not occur on Eynhallow, so the stone must have been brought here from elsewhere. Perhaps they were removed from the church when it was converted into a dwelling?

Eynhallow can only be accessed by private hire boat from either Rousay or Mainland.

Nearby accommodation is calculated 'as the crow flies' from Eynhallow Church. 'Nearest' may involve a long drive up and down glens or, if you are near the coast, may include a ferry ride! Please check the property map to make sure the location is right for you.

More self catering near Eynhallow Church >>