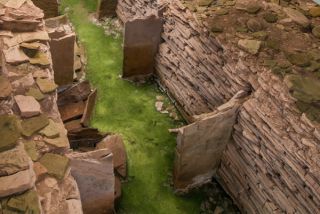 Midhowe Chambered Cairn
Midhowe is a huge Neolithic chambered tomb in an oval mound with 25 stalls. The monument is protected by a modern building, which has walkways over the tomb, providing excellent views down into the chambers.

There are 15 chambered tombs on the Island of Rousay, including three others strung out along the south coast between Midhowe and the ferry terminal. Of these tombs, by far the most impressive and best-preserved is Midhowe Cairn. It stretches some 32 metres, with a long, narrow central passage of 23 metres. This central passage is divided by stone slabs into a dozen separate compartments or stalls.

One interesting feature which you can't help but notice as you view the cairn is that the stalls at the south end are relatively plain and unadorned, but as you progress towards the northern end they become increasingly more elaborate, with low stone benches built into the east wall. The final stall is paved and is subdivided by low stone slabs.

When the cairn was first excavated in 1923 the archaeologists found the complete remains of 9 people in stalls, arranged on their sides, curled up, facing the central passage. Three more skulls were set upon a bench, and the remains of 15 more people were scattered around the cairn interior.

The theory is that the cairn was not sealed, but acted as a ceremonial centre for subsequent generations. Since the living could come and go inside the tomb, they must have rearranged the bones of their ancestors, though to what purpose we simply don't know. At some point long after it was constructed the tomb was filled with stones so that it could no longer be used.

I must confess that I was not thrilled by the modern building that covered the site. It seemed so out of keeping with the ancient history of Midhowe, like an intruder. But it did have one redeeming quality; we could walk along the raised walkways and look down into the cairn interior without disturbing the stone walls or damaging the cairn. It is a moving experience to look down into the cairn and wonder what beliefs prompted the people who used it to create such a huge ceremonial place of burial.

The cairn is a very short walk from the celebrated broch at Midhowe, also in the care of Historic Scotland. 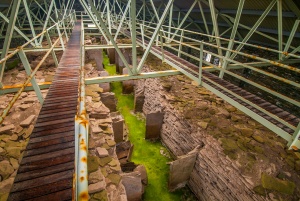 Looking down the raised walkway 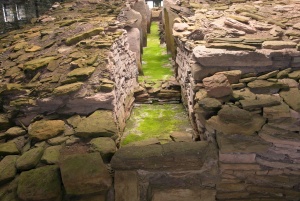 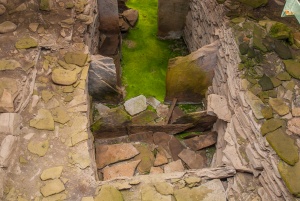 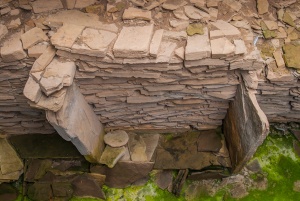 Nearby accommodation is calculated 'as the crow flies' from Midhowe Chambered Cairn. 'Nearest' may involve a long drive up and down glens or, if you are near the coast, may include a ferry ride! Please check the property map to make sure the location is right for you.