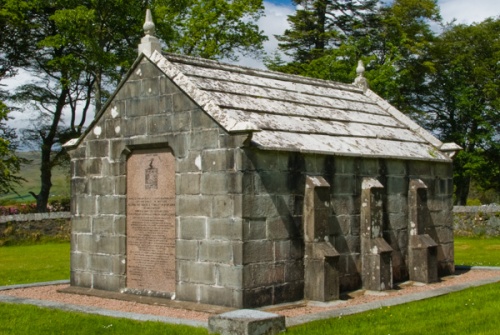 Lachlan MacQuarie was born on the Isle of Ulva, just off the northwest coast of Mull, in 1761. His father was a cousin of the last chief of Clan MacQuarrie. He joined the military in 1775, at the age of just 14, and rose to become a Major General, but retired to travel the world after 30 years of service.

When his first wife died shortly after their marriage, MacQuarie was despondent and returned home to Mull. There he met and married his second wife, Elizabeth Campbell, in 1807. In 1809 he was offered the post of Governor of New South Wales and moved to Australia.

During his tenure in office (1810-1821) MacQuarie travelled widely in Australia and helped improve the political stability of the newly developing region. He resigned his post in 1821 due to poor health and moved back to Mull, where he died in 1824.

So influential was MacQuarie in the establishment of a new and - for the time - relatively independent nation, that he became known as 'The Father of Australia' after his death in 1824. 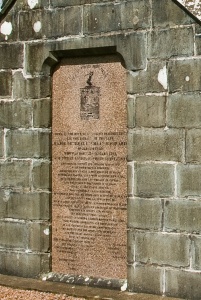 After his death, the mausoleum was built in the grounds of the Gruline estate, which he owned. The mausoleum is a very simple structure built of sandstone, a rectangle with a slate roof and gables at each end.

There are three small mock buttresses on each long wall. Both gable ends have an inset niche, occupied entirely by a large carved monument in marble. Inside are buried Lachlan and Elizabeth MacQuarrie, and their 2 children; son Lachlan and daughter Jane, who died in infancy. The mausoleum stands in a wide grassy area surrounded by stone walls.

In 1948 Lady Yarborough, who lived at a neighbouring estate, gave MacQuarie's mausoleum as a gift to the people of New South Wales.

To reach the MacQuarie Mausoleum simply follow the drive towards Gruline House off the B8035, about 2 miles south-west of Saleen (south of the B8073 junction).

I would imagine that the Mausoleum will be of most interest to Australians or to people connected to the MacQuarie family, as the building itself is not of great architectural interest. The location is wonderful, but that almost goes without saying on Mull!

Technically the mausoleum is not a National Trust for Scotland property, but since 1963 it has been cared for by the Trust on behalf of the National Trust of Australia (New South Wales). 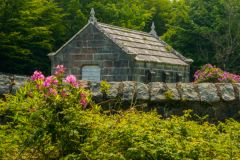 Nearby accommodation is calculated 'as the crow flies' from MacQuarie Mausoleum. 'Nearest' may involve a long drive up and down glens or, if you are near the coast, may include a ferry ride! Please check the property map to make sure the location is right for you.

More self catering near MacQuarie Mausoleum