HERITAGE HIGHLIGHTS:   A living memorial to a man who died at Culloden 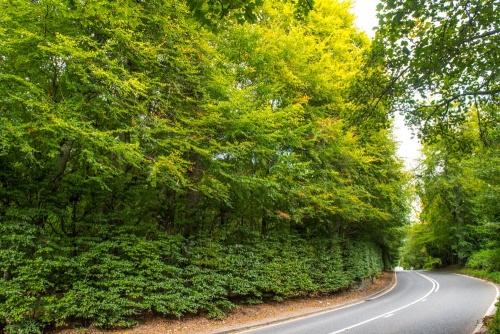 Meiklour Beech Hedge
The Meikleour Hedge was planted in 1746 and is the tallest hedge in the world. It stands 100 ft (30m) high and spans 586 yards (539m). The hedge is located right on the A93 highway, so drive slowly by for the best viewing experience.

The hedge was planted in 1795 by the married couple Jean Mercer and Robert Nairne on the estate of the Marquess of Lansdowne at Meikleour. Tradition says that the hedge was allowed to grow upwards because Robert Nairne went off to fight at the Battle of Culloden and was killed.

As a tribute, his wife Jean decided that the hedge should not be trimmed, and it was allowed to grow as high as nature would take it - which proved to be very high indeed! So the hedge acts as a living memorial to the man who helped plant it, and who so tragically died just a few short months later.

The hedge does require maintenance, and every 10 years it is carefully trimmed so it remains neat and tidy looking! The trimming is such a difficult job that it takes 4 men a full 6 weeks to finish the job. The men carefully measure the height and width of the trees and cut to maintain the current shape and size.

Pick your time of year to visit if you can; in spring the leaves are bright green with new growth, while in autumn they turn shades of red, yellow, and gold. The hedge is on the left side of the A93 road from Perth to Blairgowrie if you are driving north, or on the right, if you are heading south. Be watchful; it isn't signposted. 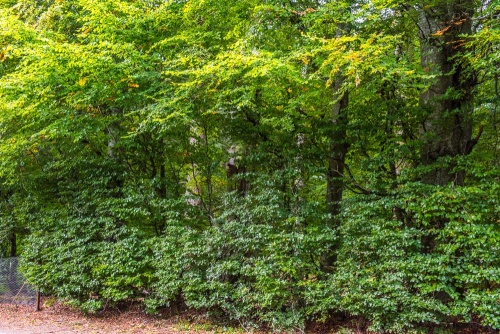 The trimmed base of the hedge (untrimmed above)

We drove past the hedge, looking for some indication of where it was, before we realised that we'd gone directly beside it and missed it entirely.

Here's how to make sure you don't miss it:

By far the easiest way to view the hedge is to approach from the south (ie from the direction of Perth) and look for the road to Kinclaven on your left. Immediately after the signposted turnoff, you will see the layby on your left. Do not wait until you see signs for Meiklour or you will have missed the hedge!

When we visited in late September the bottom 8-10 feet of the hedge had been trimmed but the upper sections had been left alone, making for a very odd-looking overhang. Having the base trimmed meant that we could walk along underneath the overhanging branches but it did rather diminish the impact of the world's tallest beech hedge.

More self catering near Meikleour Hedge >>