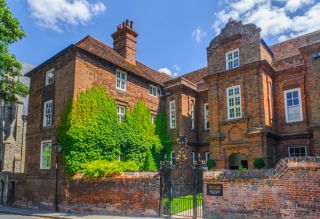 Restoration House
A unique mansion house in historic Rochester. The house takes its name from the fact that Charles II stayed here on the eve of his restoration to the crown of England following the short-lived Commonwealth. Charles Dickens used Restoration House as the model for Satis House, the home of Miss Havisham in his novel 'Great Expectations'.
History
Restoration House was not originally one, but two medieval houses. Some time in the late 16th or early 17 century the 2 buildings were combined to create an elegant mansion house. At that time the mansion stood just outside the medieval town walls of Rochester. The first owner was Henry Clerke, a successful lawyer. Clerke and his son Francis, also a lawyer, were staunch Royalist supporters and both served as MPs for Rochester.

When the Civil War broke out the Clerke's house was seized by Parliament and occupied by Colonel Gibbon, commander of Parliamentary forces in the south-east. When Cromwell died and the Commonwealth faltered, Francis Clerke was active in efforts to restore Charles II to the throne. Clerke's house was refurnished to act as a suitable overnight base for Charles to begin his triumphant journey to London and coronation.

Modern investigation has unveiled the changes made to prepare the house to receive the future king. Rooms were painted with faux marbling and French style doors were inserted to 'open up' partition walls. The interior gives us an extraordinary glimpse into the Restoration period, and how continental fashions were interpreted in this provincial town.

Restoration House has a relatively small frontage, with no hint of the large walled gardens that stretch out behind the house. The gardens cover almost 3/4 of an acre, a remarkably large area for a townhouse. There are two parts to the garden, divided in half by a low brick wall. On one side are a parterre and sunken greenhouse, on the other a cut garden and kitchen garden area. 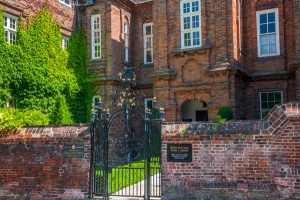 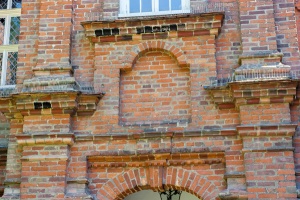 Detail of brickwork over the entrance 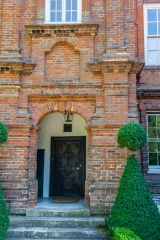 The entrance to
Restoration House

More self catering near Restoration House >>