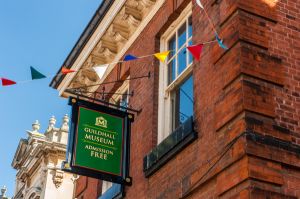 The Guildhall is one of the most historic buildings in Rochester. It was built in 1687 and features wonderful plasterwork ceilings. The ceilings were created in 1695 as result of a donation from Sir Cloudsley Shovel, MP for Rochester.

The Guildhall is topped by a late 18th-century gilded weathervane in the shape of a warship under full sail. The ship is made of copper and lead and weighs in at an impressive 51 kg.

The Rochester Museum was set up in 1897. It was originally located at Eastgate House, further along Rochester High Street, but it was moved to its current Guildhall location in 1979.

Within the museum are displays covering Rochester from prehistoric times to the present, including a prehistoric axe that may be as old as 200,000 years.

There are Roman artefacts from the Darenth villa, a recreation of a Victorian drawing room and kitchen, and a special exhibit on Charles Dickens and his ties with Rochester.

In addition, there is a replica of a Medway prison ship, and a set of 18th-century cabinet-makers tools believed to be the most extensive in the world. There is a range of family activities including free quizzes, and hands-on learning activities. 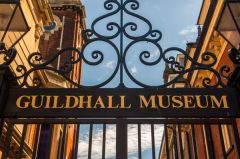