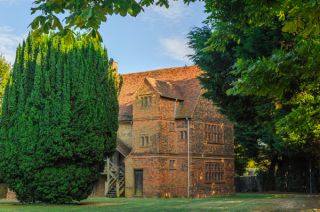 Temple Manor
An unassuming house dating to the 13th century, once owned by the Knights Templar. When it was built the manor stood in farmland. The farmland has long gone, swallowed up by the expanding urban swell of Rochester, but the house retains a large garden with tall trees to keep the modern world at bay.
History
Henry II granted the manor of Strood to the Knights Templar in 1159. The manor was built around 1240 to act as a lodging place for travellers between London and Dover. The manor estate was administered by a bailiff, and it seems likely that only as many as a pair of knights were resident at any one time. The manor consisted not only of the residential hall but a kitchen and a range of other service buildings.

The Manor only served its original purpose as a lodging for 60-70 years, and by the early 14th century, it had been converted to full-time use as a farm. The Templars did not run the farm themselves but rented it out to a series of tenant farmers.

In the early 14th century the Templars fell from power and their estates were seized by the crown. In 1336 Edward III granted Strood Manor to the Countess of Pembroke. Income from farming was used to support a Franciscan nunnery.

After the Dissolution of the Monasteries, the estate passed to into private ownership. The estate was divided and subdivided, then in the 1930s, the City of Rochester bought the remainder to use for industrial development. The manor house itself was left to decay until it was rescued and restored by the Ministry of Works after WWII. It is now cared for by English Heritage and is open limited days in the summer.

The manor stands two storeys high, with an undercroft supporting a large first-floor hall, reached only by an external stair. The hall was used by the Templars as a combination living and sleeping area and for business purposes. The medieval hall was altered with the insertion of a large 17th-century fireplace. There are 17th-century brick extensions at both ends of the building. Excavations have revealed traces of a 14th-century timber hall on the north side.

Perhaps the most interesting feature is in the first-floor hall, where traces of medieval wall paintings have been found. There are beautifully carved mouldings, and the main doorway is flanked by Purbeck marble shafts.

Visiting
Temple Manor is rather incongruously set within an industrial park, surrounded by warehouses and car repair lots, bounded on one side by a railroad track, and the other by Knight Road. The manor has very limited opening hours; though you can clearly see the house from the tall metal fence on Knight Road.

There is extremely limited parking in the area. You might want to park at the nearby superstore at the junction of Priory Road (A228) and Knight Road, and simply walk 5 minutes to reach the manor. 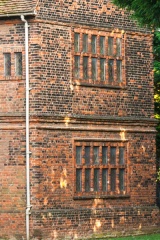 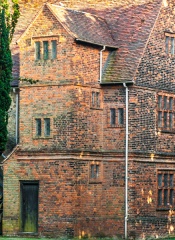 More self catering near Temple Manor >>