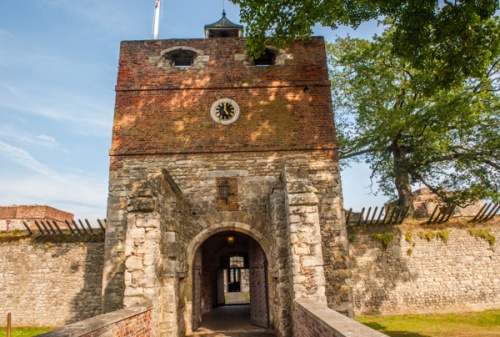 This lovely Elizabethan castle stands on the north bank of the River Medway. It was built in 1559 as a gunfort to defend the Medway and the Royal Dockyards at Chatham. In that effort the castle proved ineffective, allowing the Dutch to sail unimpeded to Chatham and destroy much of the fleet in 1667. The story of the Dutch raid is told in exhibits and artefacts on display inside the castle.

Though it glories in the name 'castle', Upnor is actually an artillery fort. When Elizabeth I established a naval dockyard at fleet anchorage at Chatham, she needed a fort to protect the mouth of the Medway from attack. Upnor was the answer.

The castle was begun in 1559 under the direction of Sir Richard Lee and took 5 years to complete. Lee's design called for a stone keep defended by a pointed bastion jutting out into the river. In 1599 the original castle was enlarged with a curtain wall on the landward side, defended by a ditch. Within the ditch was a large gatehouse, and a pair of towers were added, one on either side of the stone keep.

Despite the landward defences, Upnor's primary role was to fire on enemy ships sailing up the Medway, and it was never intended to repel a direct attack. Each tower had gun emplacements on several levels, providing lines of fire over the river and flanking fire along the walls. The main guns were installed on the triangular 'water platform' projecting into the river. 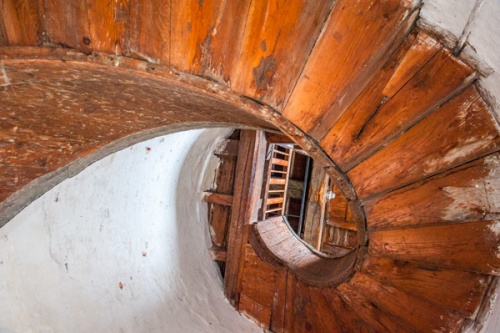 Within the keep were quarters for a garrison, with ammunition storage and a gun emplacement on the first floor.

Upnor was captured by Royalist forces during the English Civil War, but its first real taste of action came in 1667 when a fleet of Dutch warships under Admiral de Ruyter sailed up the Medway. The Dutch destroyed the unfinished fort at Sheerness and sailed toward Gillingham. The English defences proved totally inadequate the Dutch broke through and carried on up the river.

The English retreated, withdrawing their ships to Upnor and bringing in extra gunpowder for the expected battle. Many English ships were sunk off Upnor to prevent them being captured by the Dutch.

The Dutch warships exchanged fire with batteries at Upnor Castle and managed to burn three English warships before withdrawing. The channel was now clogged with half-sunk ships, and the Dutch suffered heavy casualties. They decided to break off the attack and sail away with their booty.

Upnor failed in its mission to halt the Dutch because of one fatal flaw in its design; the water bastion was shaped like the point of a star, which meant that only one side of the bastion faced upriver. That meant there were not enough gun emplacements to fire effectively on a fleet approaching down the Medway. 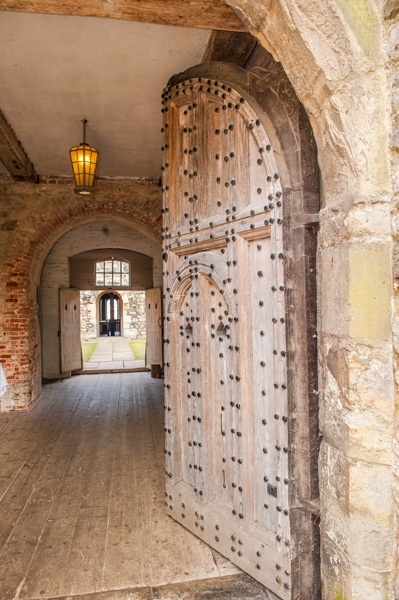 The failure of Upnor Castle to halt the Dutch raid led the government to reconsider their defences on the Medway. New batteries were built at Gillingham and Cockham Wood, and Upnor was relegated to the role of a magazine, or ammunition storage depot. The gun platforms were removed from the roof of the towers and the keep. Upnor continued in military use until WWII, though it never saw action again.

The castle we see today is in essentially the same condition it was in during the Dutch raid. There is an excellent audio-visual presentation - in both Dutch and English - telling the story of the 1667 raid in vivid detail. The location is utterly superb, with wonderful views across the river towards Chatham and the Royal Naval Dockyards.

One of the intriguing and unusual features at Upnor is a spiral stair inside the keep. The stair has a hoist inside the stairwell to raise and lower ammunition quickly. But what is unusual is that the stair itself is cantilevered out from the wall, without supports, making it perhaps the earliest example of a cantilevered stair in England.

Another unusual feature to look out for are a pair of turkey oak trees in the courtyard. These are thought to have been grown from seeds brought to England from Crimea after the Crimean War. Inside an upper chamber in the gatehouse is an intriguing bit of graffiti, discovered when the castle was being restored in 1949. The graffiti shows a ship under sail and has been dated to experts as being made around 1700. 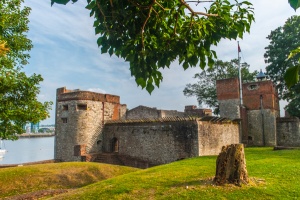 The castle from the east 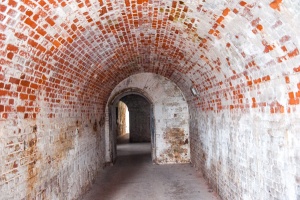 Underground passage to the water bastion

More self catering near Upnor Castle >>