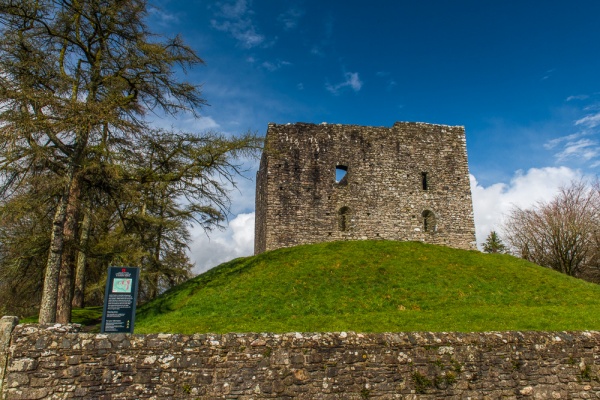 Lydford Castle is a 13th-century square tower keep with a notorious reputation as a prison. Nearby are remains of an earlier Norman earthwork fortress, and a 9th-century Saxon village.

Shortly after the Norman Conquest, a small earthwork fort was built by the invading Normans on the tip of the promontory at Lydford, partly overlying the Saxon town bank. It would be stretching a point to call this earthwork fortification a castle; it was a crescent-shaped system of ditches and banks with a timber palisade on top, protecting five wooden buildings.

This early fortification was used only briefly, but you can still see the layout of the banks and ditches. The wooden buildings were in use as granaries in the 12th century when they were destroyed by fire, and the fort was abandoned.

Lydford became an important administrative centre for the Norman lords of Dartmoor forest, who evolved a special system of taxation and laws to oversee the lucrative tin trade of Devon. The tin mining districts became known as stannaries, and they were administered from Lydford.

In 1194 King John built a tower near the church to act as a prison for those accused of breaking forest or stannary laws. This tower evolved to become Lydford Castle, though it was never a castle in the usual sense but served primarily as a prison.

The castle is a very simple two-storey high tower, about 50 feet square. The walls are a remarkable 10 feet thick and are pierced with deeply-splayed windows in traditional Norman Romanesque style. 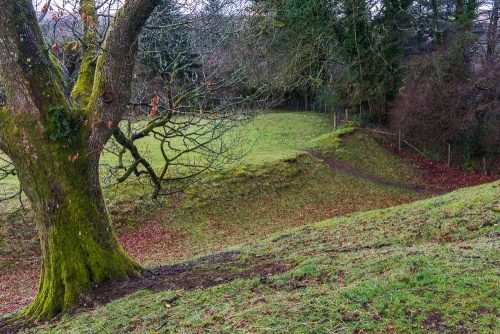 Earthworks of the Norman fort

The tower was rebuilt in the 13th century, with the top storey pulled down and the base used as a foundation for a new tower. The new tower was supported by earth piled around the earlier castle foundations so that it appears to rise from a motte, or castle mound.

You can easily see the division between the 12th-century castle and the 13th-century building, with rows of holes for floor joists clearly showing inside the castle walls.

A small earthwork bailey enclosure was added to the north, linked to the castle by a large doorway giving access to a mural stair. The stair led to a hall on the first floor, and you can still see the holes for a drawbar used to defend the doorway. 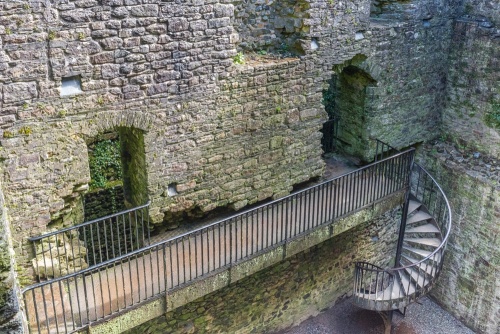 Henry III later granted Lydford to Richard, Earl of Cornwall. Though briefly a crown possession after the death of Richard's son, Lydford has belonged to the Duchy of Cornwall since 1337, and it continued to be used to imprison those accused of breaking stannary laws until well into the 18th century. The stannary courts had a reputation for harsh justice and even harsher conditions for prisoners.

This reputation gave rise to a famous verse written by poet William Browne in the early 17th century. Browne wrote

"I oft have heard of Lydford Law
How in the morn they hang and draw
And sit in judgement after."

One of the prisoners at Lydford Castle was Richard Strode, a miner but also an MP. He complained that mining was causing the harbour at Plymouth to silt up, but such was the power and importance of the tin trade to the crown that Strode was thrown into Lydford gaol for his complaints.

The ruins of Lydford Castle form just part of a remarkable array of historic remains in the village There was a Saxon town here as early as the 9th century, with streets carefully laid out on a regular grid system. The modern pattern of streets and hedges follow the Saxon grid.

The town of Lydford was a very important regional centre, made prosperous by the booming tin trade. So prosperous, in fact, that Lydford paid as much in taxes as important towns like Barnstaple and Totnes. By the 10th century it had its own mint, another sign of its regional importance.

The town's prosperity was no doubt helped by its strategic location, on a promontory jutting out between a pair of steep river valleys. The promontory forms a slender triangle of land, and the third side of the triangle was defended by a rampart of earth.

You can still see evidence of the rampart near the village hall. The combination of earthworks and the naturally steep-sided valleys helped Lydford successfully repel a Viking attack in 997 AD.

Lydford is an absolute delight to visit. You can clearly follow the outline of the Saxon town, and it is interesting to compare the early Norman fort with the later castle. And do take time to visit the church of St Petroc, a very early Christian site with some intriguing pre-Norman features. The path from the castle to the earlier fort leads directly behind the churchyard. 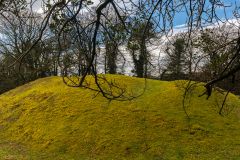 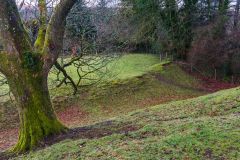 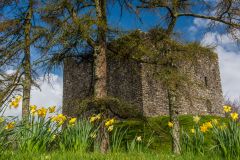 More self catering near Lydford Castle >> 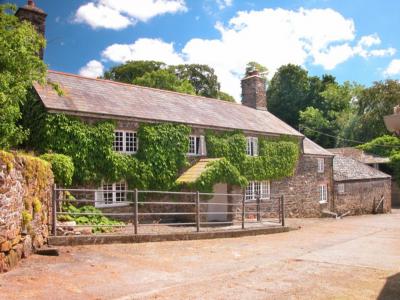 This big old farmhouse is on a beautiful Dartmoor farm near Lydford and can sleep ten people in four bedrooms.
Sleeps 10 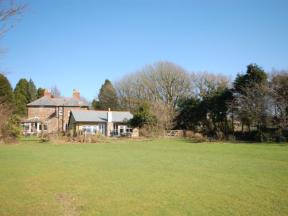