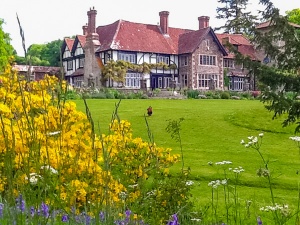 Coombe Trenchard is a Grade II listed Arts and Crafts style house built in 1906 for the Sperling family of Lewtrenchard. It replaces an earlier rectory on the same site that had fallen into decay. Sabine Baring-Gould, squarson of Lew Trenchard House, sold the property to his friends the Sperlings and built a new rectory close to the church.

The new house was designed by architect Walter Sarel of London, and built by the firm of Dart and Francis of Credition. The house is set in delightful gardens, also in Arts and Craft style. For 6 decades the gardens were lovingly maintained by the Sperlings with the aid of a team of 6 full-time gardeners.

The house is a time capsule of Edwardian life, retaining the original aesthetic Arts and Crafts period features. One of the fascinating features of the house is a secret wall at one end of the main hall. This wall behaves like a giant sash window, retracting into the floor to open up the hall or divide it into a large main chamber plus a smaller lounge for family members.

The exterior is partly brick and partly timber-framed, with a pantile roof. One striking feature is a three-stage tower with angle buttresses. 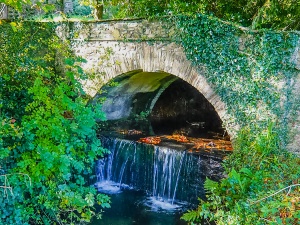 Designed at the height of the Arts and Crafts 'belle epoque', the gardens at Coombe Trenchard cover 8 acres, incorporating woodlands and terraces with bridges across a quiet stream. The major principle of the Arts and Crafts style was a mix of formal and informal garden areas, or 'rooms'. Local granite and slate were used to form stepped terraces. The designer was Walter Sarel, who also worked with famed garden designer Gertrude Jekyll.

During the course of the late 20th century, the gardens received minimal maintenance, with the result that they became overgrown and clogged with overgrown trees. After purchasing the house in 2007 new owners Sarah and Philip Marsh set about the considerable task of bringing the gardens back to their Edwardian glory.

With the aid of an old photograph album showing the garden in its heyday they have slowly begun to recreate the early 20th-century splendour of Coombe Trenchard, including many of the original Edwardian planting schemes.

In 2011 and 2012 Coombe Trenchard hosted the Gardens Illustrated magazine 'Arts and Crafts' Garden Festival. The garden is regularly open to visitors, while the house is open to prebooked groups and for country house Bed and Breakfast stays.

More self catering near Coombe Trenchard