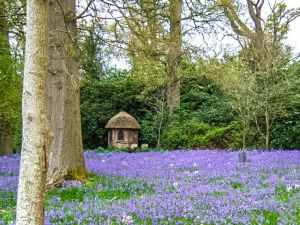 Shobrooke Park
A restored Victorian garden and pleasure-ground are all that remains of a 19th-century mansion and grounds. A series of four lakes cascade through the 180-acre park, with a series of formal gardens and terraces.

There has been a deer park at Shobrooke since the 16th century, and this probably formed the core of parkland laid out for Fulford House, an 18th-century mansion built for Sir William Peryam.

In 1811 a new house known as Little Fulford was constructed in the northern part of the old deer park, designed by Henry Hakewill (1771-1830). Then in 1845 the house was remodelled and given a facade of Portland stone by James Donaldson and renamed Shobrooke House. At the same time, a garden and park laid out around the house.

Shobrooke Park House was used as a school during the Second World War, but in 1945 a devastating fire swept through the house and killed 3 schoolboys and a nurse. The house was not rebuilt, and today only a small 20th-century brick bungalow stands on the garden terrace where the original Shobrooke House stood.

The gardens surrounding Shobrooke Park house were laid out in 1845 by Henry Hippisley Tuckfield. A stream was dammed to create a cascade of small, connected lakes, with views out over the park from the house.

The garden was managed by 6 gardeners and a boy, using only hand tools, and with the aid of a garden pony. After the house fire of 1945, the garden was neglected for several decades. A historical survey of the park and garden made it possible to recreate the original 19th-century design as closely as possible, yet make it much easier to maintain.

The garden is divided into several sections. First is the Main Terrace, where the original 1881 house stood. A Laurel Walk, or Lawn, leads to a fountain and rose garden. From this walk, you get a good view to a folly at the top of the garden known as the Shell Folly, intended as a focal point in the original garden design. The Sundial Terrace looks down into the rose garden, where you will find varieties of old roses that might well have featured in the original 19th century rose garden.

One interesting feature is The Mound, an observation platform once planted with formal beds of heather. The Mound gives a wonderful panoramic view of the gardens. Then there are the American Grounds, planted in the 1840s with varieties of plants from America, and bordered by conifers. A Camelia Walk leads to a walled garden, and then to a large woodland garden where bluebells make a colourful carpet under the oak trees in spring.

The garden is open several times each year for charity, and for pre-booked groups.

There is also public access to the southern part of Shobrooke Park, and rights of way are clearly shown on OS maps of the area, with parking areas outside the Park boundary.

More self catering near Shobrooke Park >> 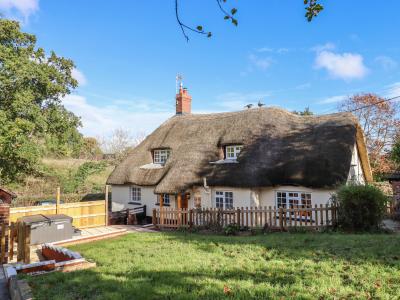 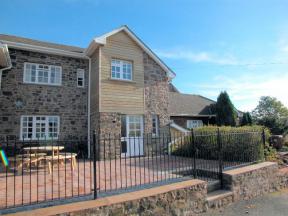 This property is located in the grounds of the locally acclaimed Waie Inn and has everything needed for a memorable Devon family holiday. The central location of the property means …
Sleeps 5