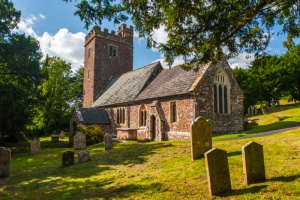 The village of Cadbury takes its name from the Iron Age fort atop the hill that towers over the village. In the Domesday Book of 1086 the name is recorded as Cadabiria, or Cada's burgh, the word burgh meaning a fortified town or settlement. An old legend speaks of a dragon living on the hilltop and guarding a great treasure.

Cadbury's beautiful church is dedicated to St Michael, as are so many other churches on or near hills. The 'All Angels' part of the name appears to be a Victorian addition. The location suggests that St Michael's may stand on or near a pagan place of worship, perhaps related to a series of springs which run along the lane at the top of the churchyard.

We do not know when the present church was built, but it was in existence by 1163 when it was given by William FitzRalph and his wife Aldreda to the Priory of St Nicholas in Exeter. The gift was ratified by Thomas Becket, Archbishop of Cantebury. The first known vicar was Everard in 1244, but the most remarkable was Rev RF Coleridge, who served the parish for over half a century, from 1855-1906. A plaque in the belfry commemorates Rev Coleridge with the words,

"For fifty years the faithful pastor trod
The village byways and the house of God;
In one the Master's Holy Lessons taught,
And to the other his example brought."

His grave lies near the churchyard cross. 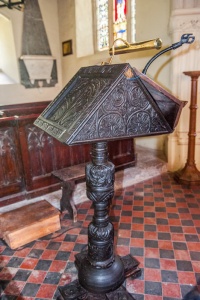 Despite its early foundation, the church is primarily 15th century, with restoration in the mid-19th century. During the Victorian restoration the churchyard cross, which originally lay broken in 3 pieces by the nearby farm, was re-erected at the top of the churchyard.

The Norman font was rescued from the ditch beside the churchyard and restored to the nave. It is made from volcanic trap and has a square bowl with a scalloped base set on a round stem.

The most interesting woodwork is the 17th-century lectern, brought here from Ottery St Mary, while the reredos was installed in 1890 in honour of Rev Edward Fursdon. The Fursdon family have owned land in Cadbury parish since the 14th century, and still reside at nearby Fursdon House.

At the rear of the church are old wardens' staves. One has carvings of ears of wheat over a vine, while the other bears the Cross of St Michael. That saint, of course, fought and killed a dragon, perhaps represented by the legendary Cadbury dragon? The choir stall bench ends are a mix of 19th century and medieval.

The east window of the north aisle holds exceptional 15th-century stained glass, originally installed in the main east window. The glass has a central figure of Christ showing his wounds. The figure is part of a Seven Sacrament design by the same workman that produced glass for Exeter Cathedral and the church at Doddiscombsleigh.

The glassworker, or workshop, is unknown, but he has been dubbed 'The Cadbury Master' for the exceptional quality of the glass design and vivid colouring. In the south aisle is a Victorian window by the famed Clayton and Bell company. 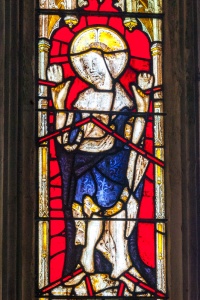 Set into the floor of the south aisle are 3 17th century grave slabs, including one to George Fursdon, a Civil War Royalist who died fighting for King Charles at Lyme Regis in 1643. The slab is carved with a coat of arms - not of the Fursdons but of the Lovells, for George Fursdon's wife was Grace Lovell of Cheriton Fitzpaine. Below the arms is an inscription that reads,

Nearby is a memorial to his grandfather, an earlier George Fursdon (d. 1625) and his father, another George, who died in 1610.

In the aisle is an 18th-century marble monument to Charles Hale (d. 1795) and a white marble wall monument to Elizabeth Lyon (d. 1789).In the vestry is an early 17th century parish chest with traces of paint still showing.

St Michael's is a lovely church in an idyllic rural location. Do take time to walk up to the summit of Cadbury Hill to see the hillfort. Quite apart from its historic intertest, the views are amazing. 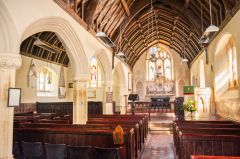 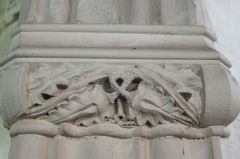 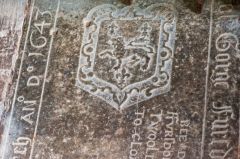 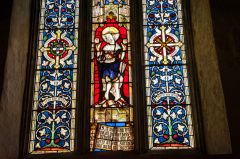