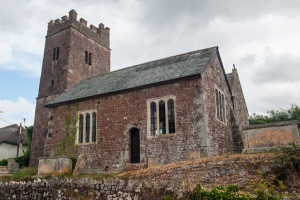 Upper Hellion is a picturesque rural hamlet a few miles north of Crediton, on the side of a steep hill looking over the River Creedy. It takes determination to find St Mary's (I almost gave up before I found a friendly local who directed me to the correct spot).

Your reward for making the effort is a delightful 12th-century country church of whitewashed walls and a 15th-century wagon roof. It is primarily of rubble and is almost untouched save for 15th-century windows inserted in the Norman walls.

There is a Georgian pulpit and several very nicely carved 15th century bench ends. One particular bench end, at the west end of the nave, features a very peculiar beast looking like a dragon with a human head. 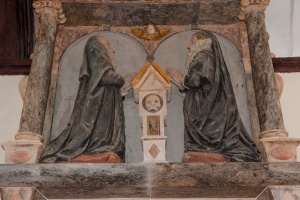 On the north chancel wall is a 17th century carved and painted alabaster tablet to a country squire and his wife. There is no inscription, but the tablet is though to commemorate Richard Reynell of Creedy Wiger (d. 1631) and his wife Mary. One early 20th-century writer thought the monument was to Richard Periam (d. 1631) and Mary his wife (d. 1662).

In typical Jacobean fashion they face each other across a prayer desk, he clad in black robes, she notable for her oversized ruff. At the base of the ornate monument is a large red heart, a nice sentimental touch, and the monument is flanked by Corinthian columns.

Against one wall is a worn grave slab with heraldic symbols, and in the chancel are floor tiles depicting signs of the Zodiac. The wagon roof of the nave has some very nicely carved roof bosses, some of foliage, some with human faces.

The very plain font, with its square bowl and clustered column shafts, is Norman, as is the south doorway by which you enter the church. The doorway dates to 1160 and features very simple carved capitals. Much of the church is built of rubble.

And that's about it; St Mary's isn't full of historical monuments; part of the charm of the church is that it is so unspoilt, so untouched by time, and such a perfect example of a remote and timeless country church. 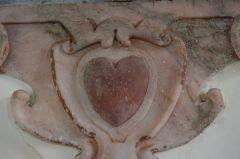 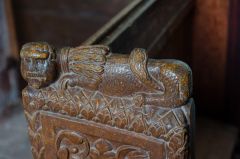 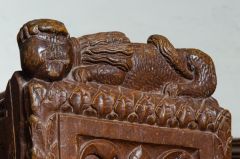 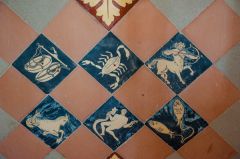 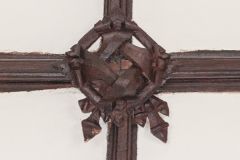 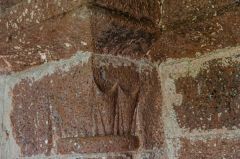 More self catering near Upton Hellions