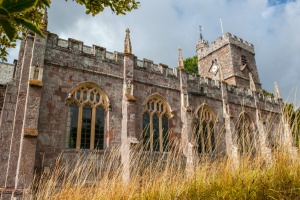 The north side of St Cyres and St Julitta

The village of Newton St Cyres grew up near a ford across the Shuttern brook. The church stands on a steep rise, but now it looks across the busy A377 that links Crediton and Exeter. The oldest part of the church is the west tower, built in the late 13th century, but the bulk of the church we see today is 14th century, with the addition of a 16th century north aisle.

Most of the church is in early Perpendicular style, built of local reddish 'trap', a volcanic stone from quarries at Posbury, with the exception of the nave pillars, which are of Beer stone. The nave and chancel are barell-vaulted, with some beautifully crafted bosses, including an unusual Three Hares boss (with three hares sharing three ears).

The pulpit is Georgian, with carved panels from the state rooms of Saltram House, near Plymouth. It was originally designed as a 'triple-decker', with stalls for the clerk and priest below the pulpit itself. The lectern is oak, made from the bell frame of Exeter Cathedral, with a lovely 16th century Flemish carving showing Jesus washing his disciples' feet.

The font is modern, but against the north aisle wall is the base of a 13th-century font found buried in the churchyard. There is a 14th-century piscina in the Lady Chapel, at the east end of the north aisle. On the east wall of this chapel is an aumbry, or cupboard, with a carved 16th century Flemish door. 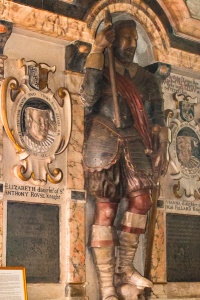 Though there are several interesting historic monuments at Newton St Cyres, by far the most interesting is that of Sir John Northcott (1570-1632), which occupies most of the space beside the Lady Chapel altar. Sir John was Sheriff of Devon, a native of Hayner Barton, and his life-sized effigy bears his baton of office in one hand. He is dressed in armour with the Northcott arms above his head and carved heads of his father and grandfather.

On either side are medallions showing each of his two wives in profile. The verses are worth inspecting. To Sir John's right is his first wife, Elizabeth Rouse. They had one son together, who died in infancy, as the inscription relates, 'My fruits were small, one sonne was all, that not at all'.

The inscription for Northcott's second wife, Susanna Pollard, tells a happier tale; they had no fewer than a dozen sone and 6 daughters. The memorial was built by his son, who kneels at the feet of his father's effigy, with his own wife and children. 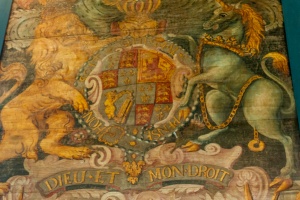 There are several other interesting - though much smaller - memorials in the chancel. On the south wall is a monument to Sherland Short, a student at Exeter College who died in 1632. The monument has an effigy of the deceased sitting at his study table, with lutes and a viola-da-gamba at his feet. He is shown with his books, a skull, and an hourglass to symbolise the ephemeral nature of his short life.

Nearby, over the piscina, is a gilded tablet to Anne Elforde (d. 1703). Around the church are numerous memorials to the Quicke family, who held the manor here for over 4 centuries. Over the north door are four Quicke funeral hatchments.

One quite unusual feature is a royal coat of arms to James II, erected in 1685. It is extremely rare to find James II coats of arms, in part because his reign was so short, but also because so many churches had already created a coat of arms during the reign of his predecessor, Charles II. And of course, James was Catholic, at a time when that mattered greatly to people. 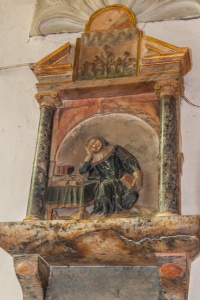 Do take time to explore the exterior of the church. Just to the left of the main south door, attached to the side of the tower, is a sundial, dated 1817. Around the north side of the church are several extremely interesting carvings adorning the large Perpendicular windows. One fascinating carving shows a strange winged beast standing atop a grimacing face.

By sheer chance, I arrived at the church just as people were starting to arrive for a Sunday service. I would have forgiven the people there if they had looked askance at the bespectacled, camera-wielding historian poking about their church, but nothing could have been further from the truth.

Everyone (the vicar included) was very keen to make me welcome and encouraged me to explore the church right up until the service was about to start. They were proud of their historic building and wanted me to appreciate it as they did.