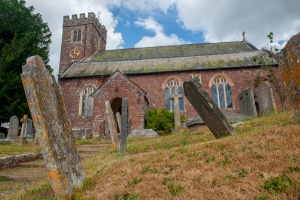 The church of St Swithun's stands on a rise of ground a stone's throw from the village square and attractive pub in this quiet village north of Crediton. The hillside location seems at odds with the original meaning of the village name, which translates from the Saxon words for a sandy ford. The ford is at the bottom of the hill, but the village is very much near the top!

There was a church here in the Saxon period, and traces of that structure can be found in the lowest stage of the tower and the base of the current walls. Apart from that the church dates mainly to the 13th and 14th centuries.

The building is fairly small, built in the Gothic style, with of a chancel, nave, two aisles, south porch and an embattled western tower. Sandford was associated with the Saxon monastery at Crediton that grew up following the death of St Boniface, a native of the town.

After 1050 St Swithun's was a chapel of ease under the control of Holy Cross church in Crediton, and it was not until 1928 that it became independent. There was an amusing incident in 1437, when the Swithun's was again closed, this time because so many local people were making the trip to Holy Cross rather than worshipping in their own church.

The church license was withdrawn, though it was allowed to hold 'celebration of Devine worship ... on particular occasions.' It was not until 1523 that the church reopened for regular worship. 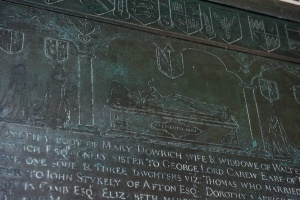 One of the most interesting interior features is a finely carved west gallery, dated to 1657 and used to seat children from the local poorhouse. The gallery stands on Corinthian columns and is beautifully carved and painted. In the south aisle is a painted board commemorating a gift of money to 'six poore husbandmen of this p'ish' by John Davie in 1675.

In the chancel is a 17th-century wall memorial of marble to the Davie family of Creedy Park. In the north aisle is another Davie memorial, in the form of a marble plaque to Julia Davie (d. 1627).

Murder in the Church

On the north wall is a fascinating 17th-century brass plaque to members of the Dowrich family. On a nave pillar capital is a humorous carving of two naked figures tearing each others hair. One wonders what story lies behind this carving? Well, we do have a clue in an account by a 17th-century rector, Rev. John Hopkins, chaplain of Sandford in 1651.

Hopkins writes that around 1127 an argument broke out between 2 men during a service. The fight escalated and one man was killed. As a result of the murder, the church was closed, and no services allowed to be held for 11 years, until an appeal to King John around 1137. The king ordered services to resume.

For more see our extended article on the History of St Swithun's church. 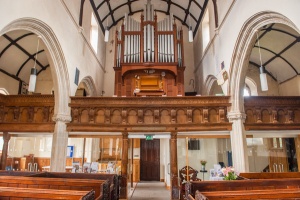 The best feature of St Swithun's is its wonderful array of 16th century carved bench ends. The subject of the carvings is wonderfully varied and includes foliage, heads of men and women, a likeness of a king said to be Henry VIII, another of Queen Katherine of Aragon.

Some are obviously civilians, others are in military garb. Some of the most fascinating carvings show what appear to be native Americans and people with Aztec features. 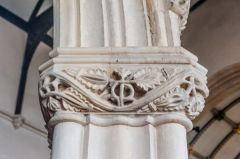 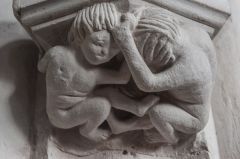 More self catering near Sandford

More bed and breakfasts near Sandford

Self Catering near Sandford