Upton Pyne, Church of Our Lady 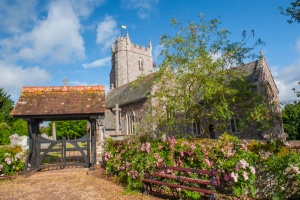 The Church of Our Lady, Upton Pyne

The Church of Our Lady in Upton Pyne makes such a pretty sight, set within a churchyard bedecked with flowers in summer, reached over a cobbled road flanked by thatched cottages, through a lovely wooden lych gate. It looks like a 'ye olde worlde' postcard view of traditional England.

The earliest church on this site dates to the mid-13th century, but the current building is primarily 14th century; it was dedicated by the powerful Bishop of Exeter, John de Grandisson (see Ottery St Mary), in 1328. In the churchyard stands an ancient medieval cross that may have belonged to the earlier church on this site.

The striking west tower has statues of the Evangelists at the corners. Though now quite worn, these unusual carvings are of very high quality and were probably carved by masons from the Exeter Cathedral workshop in the late 14th century. On the south wall is a figure of King David, and over the west door is a carving of Christ, blessing worshippers entering the church. 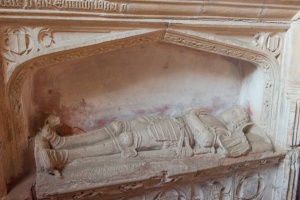 Inside the church, the main historic attractions are a pair of 16th century canopied tombs in the south wall to members of the Larder family, lords of the manor here from the 12th century. The largest and most impressive tomb is that of Edmund Larder (d. 1521).

It shows the deceased clad in plate armour, lying on a chest with a dog at his feet, a sword by his side, and his head resting on a helmet. The tomb table is decorated with heraldic shields. As a whole, this is a lovely example of a Tudor canopied tomb.

By contrast, the second Larder tomb is much plainer, and has no effigy. It commemorates Humphrey Larder, Edmund's grandson (d. 1588) and his wife Margaret (d. 1604). over this tomb is a wall tablet to Lucy Stafford, eldest daughter of Sir William Courtenay and the second wife of High Stafford of Upton Pyne. Lucy died in 1693 at 44 years of age, but the tablet also records the sad death of her daugher, also named Lucy, aged only 3, in 1675. 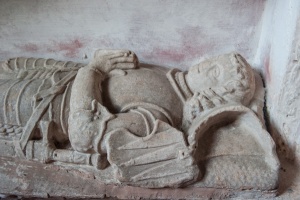 In the south aisle is a memorial window to the 1st Countess of Iddesleigh, and here are gathered some beautiful fragments of 17th century Flemish glass. In the central panel is the Countess's family coat of arms (the Northcote family, who became patrons of the living at Upton Pyne in 1797). The north aisle window is dedicated to Stafford Henry Northcote, the 1st Earl of Iddesleigh (d. 1887). Northcote had a long political career and served as Chancellor of the Exchequer and Foreign Secretary.

Behind the altar is an ornate reredos, also dedicated to the Earl of Iddesleigh. The central panel of the reredos is an Italian painting on canvas of the Last Supper. The artist is unknown, but the painting was brought to Upton Pyne in 1710.

The church is normally open daylight hours. When I arrived fairly early in the morning the door was locked, but a sign in the porch told me I could find the keys at the farmhouse across the road. And what keys they are! I've never seen a larger, heavier church key; it could be used as a club. But it worked, so if you find the door locked when you arrive, check the notice board inside the porch for info on how to find the keyholder. 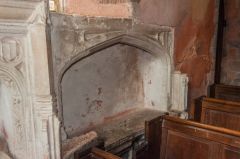 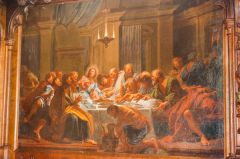 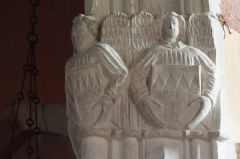 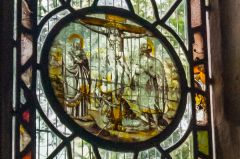 More self catering near Upton Pyne