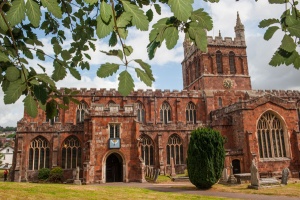 Not too many churches can match the mouthful of a name used by Crediton's parish church. The dedication, in full, is 'Collegiate Church of the Holy Cross and the Mother of Him who hung thereon'. Most people just call it Holy Cross.

Whatever name you favour this is one of the finest historic churches in the south west of England, built on the site of a Saxon minster and cathedral dedicated to St Boniface. Ah, yes, Boniface (aka Wynfrith or Winfrid); his presence looms large over this attractive market town.

Boniface has been called 'the Greatest Englishman', a claim that seems a subject for a prolonged argument, but there's no doubting his historical impact on Crediton. Boniface was born a short stroll from Holy Cross at Tolleys, at the bottom of East Street, around Ad 680.

A plaque on a stone wall marks the location. He was educated at a Benedictine monastery in Exeter, and then on to a monastery at Nursling (Southampton) where he wrote the first known dictionary of Latin grammar. He went on several missionary trips to Germany and Holland, and was named a bishop in 722 and an archbishop in 732. 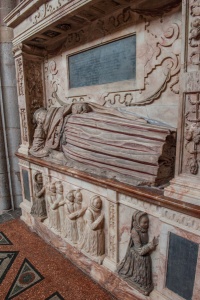 After a lifetime of acting as a missionary in the Germanic kingdoms, he was martyred in Friesland. His legacy is not, however, as a martyr, but as an organiser of church structure, libraries, monasteries, and education. It is said that he had a greater influence on European history than any other Englishman.

There are several memorials to Boniface inside the church, including a series of stained glass panels in the huge east window over the high altar. These panels show key events in his life, including his birth in Crediton and the moment he crowned Pein as King of the Franks.

At the west end of the south aisle, a colourful Victorian stained glass window depicts Boniface holding a sword and pierced book. In the north aisle is a striking wooden statue of the saint by Polish sculptor Witold Kawelic.

Given the esteem in which St Boniface was held, at least outside his native country, it is no surprise that a minster church and cathedral grew up on this spot. In fact, Holy Cross can trace its history further back in time than any church in Devon, including Exeter Cathedral.

In 739 King Aethelheard of the West Saxons gave land to Forthere, Bishop of Sherborne, to build a monastery here. In the early 10th century the diocese of Sherborne was split into three parts, with Crediton chosen as the site of a cathedral for the new see of Cornwall and Devon.

In 1046 the cathedral was moved to Exeter, ostensibly because it was more easily defended from Danish raiders, but in reality, because the new Bishop, Leofric, thought that a 'mere village' like Crediton was unsuited to his station. Recent radar surveys of Holy Cross suggest that the Saxon cathedral might have been sited beneath the current nave and south transept. 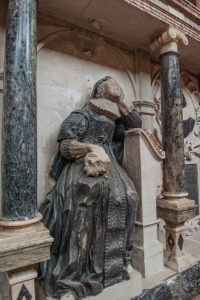 Though the see moved to Exeter, the Bishop maintained a palace in Crediton, north-east of the current churchyard. Sometime prior to 1130 a new Norman church was built, with a college of 18 canons and 18 vicars. The number of canons was later reduced by 12 due to lack of funds.

Though the vicars all lived in Crediton, many of the canons were absentee prebends. The college had its own court and officers, and its own residences. The church was initially dedicated to St Mary; it was only in the mid-13th century that the dedication was changed to 'The Church of the Holy Cross and the Mother of Him who hung thereon'.

In the late 13th century the church was extended with the addition of a Lady Chapel and Chapter House. During the medieval period, Holy Cross became a regional centre for pilgrims, with worshippers flocking to Crediton to seek a cure for illness. Many made offerings in exchange for indulgences, or a pardon for sinfulness.

One of those who came to Holy Cross in search of a cure was Tomas Grey, a fuller of Keynsham, near Bristol, who had lost his sight. In 1315 he journeyed to Crediton and while praying in the Chapel of St Nicholas (now Friend's Chapel) his sight was miraculously restored.

At that very moment, Bishop Walter de Stapleton was celebrating mass at the high altar. Bishop Stapleton investigated Grey's story and was satisfied that a miracle had occurred. A striking wooden sculpture called 'Sight Restored' stands in the north aisle to commemorate this event. 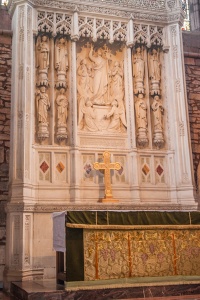 Later in the 14th century, Bishop Grandison reorganised the collegiate chapter and helped popularise the cult of St Boniface, but the current church owes more to the munificence of William Langeton (d. 1413) who gave money to pay for rebuilding the now decaying church in fine Perpendicular style.

Henry VIII's Dissolution of the Monasteries put an end to the college of priests at Crediton, and in 1545 the church and all its estates were given to Sir Thomas Darcy, who quickly traded them back to the crown for estates elsewhere.

The townsfolk of Crediton moved in an purchased the church for the town, at a cost of £200, and a corporation under a dozen governors was set up to administer the church and its estates. oNe of the governors' acts was to establish a Free School in the Lady Chapel (the school moved to purpose built buildings on High Street in 1860). 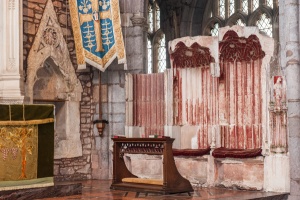 One of the most impressive monuments in the church is on the north side of the sanctuary, near the altar This is the ornate tomb of Sir William Peryam (1534-1604). Peryam was an MP, a judge of the Court of Common Pleas in 1581, and Baron of the Exchequer in 1593. During his legal career he was involved in many high-profile trials, but none more important that the treason trial of Mary, Queen of Scots in 1586.

Peryam also tied the Earl of Essex after his unsuccessful coup of 1601, and the Ear of Arundel (charged in 1585 of aiding Queen Mary). He served as a Governor of Holy Cross and church warden. His effigy shows him propped on one elbow, while on the frieze along the base of his tomb are his 3 wives and 4 daughters.

Near the Peryam tomb is the Tuckfield Memorial, built in the 1630s by Sir Thomas Tuckfield to commemorate his wife Elizabeth (d. 1630) and father John (also d. 1630). Sir Thomas' bust was added 12 years later when he died at the onset of the Civil War.

The tomb is divided into 3 sections by marble columns. In the centre section, a life-sized effigy of Elizabeth stands, leaning in a quite casual attitude upon a prayer desk, her elbow resting on a Bible, while her other hands lies on a skull. The effigy's face is damaged, perhaps by Parliamentary supporters, as the Tuckfields were well-known Royalist supporters. 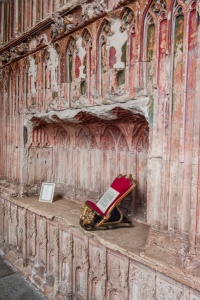 Much older than the above memorials is the table tomb of Sir John de Sully and his wife Isobel (1387) in the south choir aisle. Sir John lived to the age of 106, a remarkable achievement today and almost miraculous by 14th century standards. Sully fought in many of the most important battles of the 14th century, including Bannockburn, Crecy, Poitiers, and Halidon Hill.

This is by far the oldest memorial in the church and was probably erected in the 1390s. Both effigies are very worn, but you can clearly make out Sir John's mail armour and Lady Isobel's extravagant headdress.

On the south side of the sanctuary is a beautifully carved sedilia facing the altar backing onto a recessed tomb facing into the south choir aisle. These are almost certainly the work of the same sculptor and date to the early 15th century.

Both carry heavy traces of red paint and share the same style of vaulted canopy. The tomb is thought to be that of an early Dean of the Collegiate Church. The lierne style vaulting is beautifully sculpted, with small niches for statues of saints (now gone). 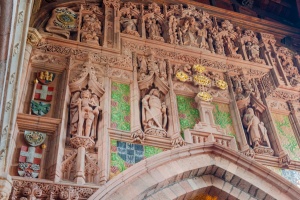 One of the most astonishing memorials in the church is one of the most modern; it is the Buller Memorial, which occupies the entire east wall of the nave (the west face of the tower arch). This extraordinarily detailed monument was designed by W.D. Caroe in 1911 as a memorial to General Sir Redvers Buller.

It is full of detailed symbolism, including signs of the apostles, military leaders, foliage, and heraldic coats of arms. Among the profusion of symbols is a carving of the Victoria Cross, awarded to Buller in 1879 for conspicuous bravery in the Zulu War.

What a wonderful church. There is so much to admire. Pride of place must go to the memorials in the sanctuary, but the sedilia and tomb recess are quite beautifully crafted. One can only wonder what they might have looked like if the iconoclasts had spared them.

The Buller Memorial is exquisite, one of the finest early 20th century monuments I've ever seen. And there is so much lovely architectural detail everywhere you look.

Do take the time to stroll down East Street to Tolleys, where a plaque marks the site of St Boniface's birthplace. Though there's not much to see besides the plaque, it really does bring home how someone who influrenced the course of European history so much came from what was at that time just a small out-of-the-way Devon village. 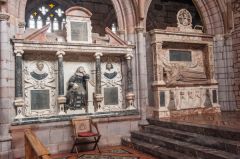 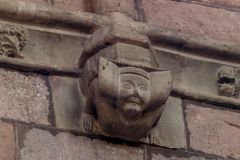 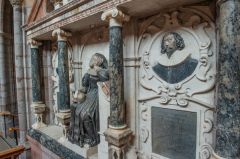 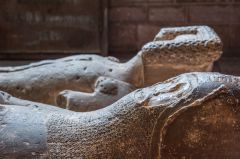 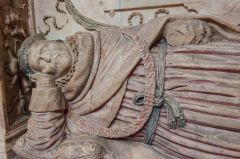 More self catering near Crediton

More bed and breakfasts near Crediton

Self Catering near Crediton