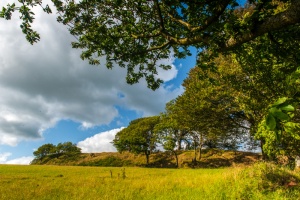 On a low hill overlooking the Exe valley stands the remains of an Iron Age defended hilltop site, about 250 metres above sea level. The name is said to come from 'Cada's burh' (burh being the Saxon term for a defended town or settlement). The views are exceptional, with the heights of Dartmoor and Exmoor easily visible. The hill has been part of the Fursdon estate since 1259.

Archaeologists have discovered at least 2 phases of settlement, plus an external earthwork defence dating from the Civil War period. Excavations inside the earthworks found a 3rd-century Roman ritual shaft, or well. The shaft had been partially filled with pottery from a nearby Bronze Age barrow. Unfortunately, the shaft was filled in after excavation, and there is no trace of it now.

The apparent ritual nature of the shaft suggests some sort of ritual observance within the older earthworks. The shaft reached 58 feet in depth and contained pottery fragments, bronze pins, rings, parts of weapons. The collection of personal items suggests that the shaft was used as a place to deposit votive offerings, as at a shrine. Excavations also found a hoard of coins by the road leading to the camp. 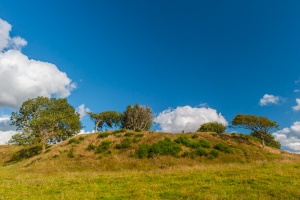 The earthworks from the west

The earthworks are composed of a small internal bank enclosing an area of about 2 acres, with an entrance on the east side. The enclosure was later enlarged and refortified with an impressive rampart and ditch.

The site was probably used during the Saxon period as a moot, or open-air court for administering the local area.

An ancient legend says that a dragon guards a treasure on Cadbury Hill. The Cadbury Dragon is said to fly between Cadbury and Dolbury Hill at Killerton. It also is said to defend the Fursdon family of nearby Fursdon House, and protect the family in times of need.

Another legend suggests that Cadbury is King Arthur's Camelot, and that the king and his knights lie asleep within the hill. Another version of the legend says that King Arthur leads his knights on midnight hunts over the nearby hills at certain times of the year. This legend is more often applied to Cadbury hillfort in Somerset, so it is possible that references to Devon may be confusing the two sites. 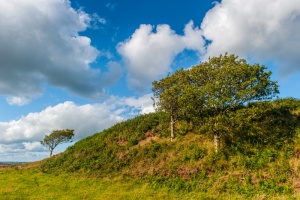 We are firmer historic grounds when it comes to Civil War history. In 1644 Sir Thomas Fairfax led a body of Parliamentary soldiers to occupy the hillfort as part of his attack on nearby Bickleigh Castle. Fairfax and his men soon departed, and a local tale says they were driven away by the dragon.

As you turn off the A3072 into Cadbury village there is a green sign saying 'Footpath to Cadbury Castle'. That's rather misleading, for the footpath does not start at the intersection but almost 1km further on, past the parish church.

In theory there's a parking area at the start of the path, at the top of Milk Hill. A signpost indicates parking but I drove a good mile trying to find it and gave up. I ended up parking outside the church, which was only a 5 minute stroll from the start of the path. The well-marked trail leads steeply uphill for 5 minutes before levelling out somewhat.

You pass through a deeply wooded track before emerging beside a farm field. You then pass through a gate and find yourself at the outer earthwork. It takes no more than 10 minutes from the base of the hill to the hillfort.

There are no signs or information panels that I could find, but the shape of the earthworks are easy to make out. A track leads along the top of the outer earthwork bank, and gives a good view of the wide ditch and inner earthwork. When I visited a herd of sheep were peacefully browsing in the centre of the fort.

The best view of the earthworks are from the west side, where the banks are at their highest. On this side the views over the valley below are amazing. It is no wonder that the inhabitants chose this hilltop site, for they would have seen over all the surrounding area with ease. 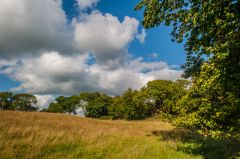 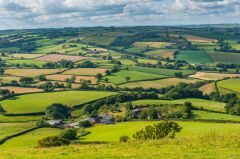 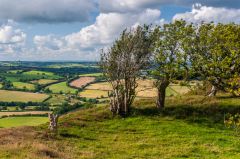 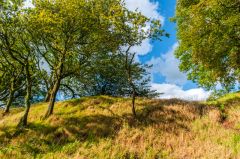 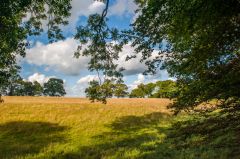 More self catering near Cadbury Castle