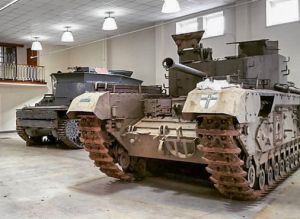 Tanks at REME Museum of Technology
This museum is dedicated to showcasing the heritage of the Corps of the Royal Electrical and Mechanical Engineers (REME) and their contribution to enduring engineering excellence. The REME is responsible for maintaining, servicing and inspecting mechanical and electronic equipment for the British Army.

Displays cover the history of the Corps, REME vehicles from 1942 to the 1990s, a history of electronic training and its uses in the military, and historical tableaux of military barracks. A large part of the museum is its collection of military vehicles, which is one of the largest collections in the UK. Roughly 20 of these vehicles are on show, while the others are in storage but can be viewed by appointment.

There are 5 main museum areas. The first is a recreation of a 1950s Guard Room and shows how security is maintained on a military base. Here you will also see a display on the first Director of REME, Major General Rowcroft.

The Main Museum area showcases the various trades that REME craftsmen specialise in. See a display of medals won by REME soldiers and officers. See everything from Black leather Wellington Boots to a Cold weather mask worn on a Trans-Antarctic Expedition.

The Electronics Display area explores the history of electronics in both military and civilian life. See British Army radio equipment dating from the 1930s to the present. See a Field Telephone Set, Line Measuring Set, wireless set, and signal generators.

The Armour's Hall holds a collection of weapons, dating to the 16th century. Here you will find everything from swords and knives to service rifles, machine guns, heavy weapons, and pistols such as the 1880s 11mm Pistol Revolver and a percussion .50 inch pistol dated to 1840.

One of the latest additions to the museum is the Prince Philip Vehicle Hall, which holds a collection of repair and recovery vehicles. dating from the Corp's creation in 1942. A special part of the Hall explores the life of Major Ivar Hirst, who helped the Volkswagen company rebuild after WWII. Part of the VW exhibition is part of a VW Beetle converted into a sofa.

The Hall holds some fascinating military vehicles, including a Challenger Armoured Repair and Recovery Vehicle (CRARRV) and a 1948 VW Beetle, the first ever Beetle in Britain. The Hall is named for Prince Philip, Duke of Edinburgh, who serves as the REME's Colonel in Chief.

REME maintains a large archive of documents and photographs which can be accessed on request. The museum welcomes school visits and can tailor visits to the school's educational needs.

There is plenty of onsite car & coach parking, and there is a disabled parking area beside the main entrance. The museum is outside the camp’s security perimeter, so no ID is required to enter.

More self catering near REME Museum of Technology >>

More bed and breakfasts near REME Museum of Technology >> 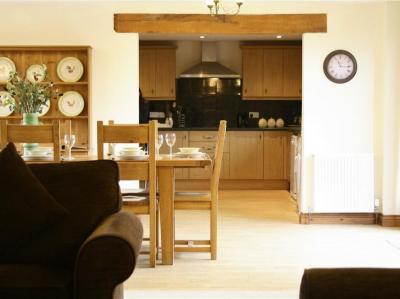 This barn conversion is situated in Lyneham, Oxfordshire and can sleep eight people in four bedrooms.
Sleeps 8