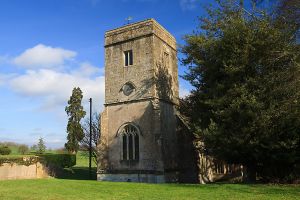 Draycot Cerne, St James Church
An early medieval century church in a parkland setting within the privately owned Draycot House estate, St James has a 13th-century nave and an Early English chancel. Interestingly, the floor of the chancel is set below that of the earlier nave.

The church tower was added in the 17th century and the church was completely restored in the Victorian period when the richly coloured stained glass was inserted.

We know that there was a church at Draycot Cerne by the late 12th century and that the chapter of Salisbury Cathedral presented the rector around AD 1180. At that time the church was dedicated to All Saints.

By 1763 it was named St Peter's, so the dedication to St James seems a relatively recent one. Parts of the 12th-century walls survive in the stonework of the nave. The tower and porch were added in the 15th century. In 1692 the Long family built a chapel against the north nave doorway. This chapel was rebuilt in 1865.

The interior features several interesting memorials, including a 13th-century effigy of Sir Philip de Cerne in full armour, and a late Perpendicular tomb chest to Sir Thomas Long. The highlight, however, is a very nice brass to Sir Edward Cerne (d. 1393) and his wife Lucy (d. 1419) depicting the couple holding hands.

More recent is a bust of Sir Robert Long by sculptor Joseph Wilton. The fittings include Georgian box pews in Gothic style and a carved 18th-century pulpit. There is a double piscina dating to the 13th century, and a 15th-century font. In the graveyard is an old disused font bowl.

The church is no longer in regular use - though there are still several services each year - and is preserved by the Churches Conservation Trust. There is a keyholder nearby but the Trust suggests phoning ahead to be sure of arranging to obtain the key. See the Trust website for current details.