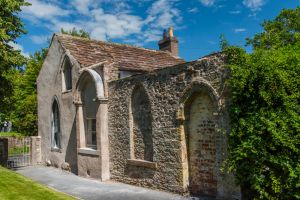 Burgh-by-Sands is famous as the place where Edward I was brought after his death on nearby Burgh Marshes in 1307. Edward was on his way north to fight the Scots under Robert the Bruce when he died, and the king's body was brought to lie in state in the fortified church of Burgh-by-Sands. The course of Hadrian's Wall runs right through the village.

Edward I was 68 when he launched yet another campaign against the Scots. He led his army north to do battle, but his health was fading quickly. On 7 July 1307, the king died at his encampment on Burgh Marshes. His body was brought to St Michael's church in Burgh-by-Sands where it lay in state before it was carried to London and burial at Westminster Abbey.

Burgh's parish church dates to the 12th century, so it would have been an old building by the time Edward I was brought here. Edward would not have known the embattled west tower, however; it was added in the middle of the 14th century. It served as much for defence as any religious purpose; like many Cumbrian churches, St Michael's was built to harbour villagers in event of an attack from across the border. The tower acted as a pele, with access only through a narrow doorway defended by an iron gate.

The church is built with stone from Hadrian's Wall and stands within the foundations of a 2nd-century Roman fort built to defend the Wall. It seems likely that it was built on the site of one of the most important Roman buildings. Most of the church is Early English, with the exception of the 18th century east windows.

The Edward the First Monument

In a lonely spot on Burgh Marshes stands a monument of red sandstone marking the spot where, according to tradition, Edward I breathed his last. The monument, square in plan and topped by a cross, was erected in 1685, though the top is a different style and may have been added in the 18th century. 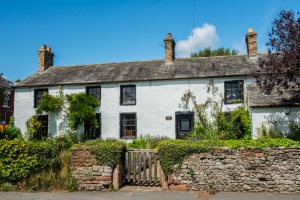 Pretty cottages opposite the Greyhound pub

The monument was restored by the Earl of Lonsdale, who unfortunately chose to enclose it within a railing so that it can be hard to make out the inscription. It stands just over 1 mile out into the marshes and is accessible by a well-signposted footpath from the village. You can walk from the village or follow the brown tourist sign up the lane to a small parking area. From there you can clearly see the memorial in a field below.

It took our family roughly 10 minutes to walk down to the monument. It's very striking, but it really is a shame there is a railing around it, which makes it very difficult to read the inscription. The location is superb, however, and I found myself imagining what it must have been like for Edward and his army as the king lay dying in this remote spot over 700 years ago.

There is a second memorial the Hammer of Scots; on the village green near the Greyhound inn stands a bronze statue erected in 2007 to mark the 700th anniversary of the king's death. The sculpture was created by Christopher Kelly and paid for by Story Construction. It was unveiled in a ceremony led by HRH The Duke of Kent.

Burgh-by-Sands is known for its links to 2 kings. We've heard about King Edward I; the other is the legendary King Arthur. Burgh has been suggested as the location of Arthur's Avalon, and the site where his sword Excalibur was made. 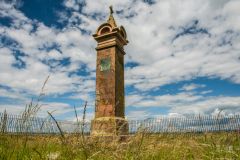 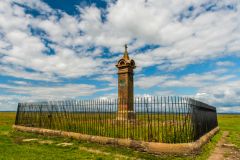 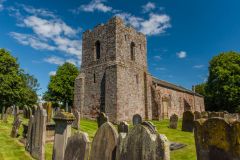 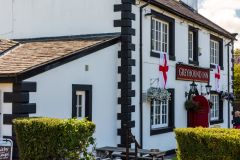 More self catering near Burgh-by-Sands >>

More bed and breakfasts near Burgh-by-Sands >>