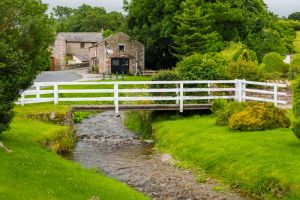 This pretty little village at the foot of the Caldbeck Fells is known as the final resting place of famed hunter John Peel (d.1854). Peel's grave is in the 12th-century churchyard, under the gaze of the fells he hunted for 55 years. A popular song about his exploits was written by his friend, JW Graves. Caldbeck is a good walking centre, with access to High Peak and Carrock Fell.

The village is a conservation area, preserving its picturesque and unspoiled character.

The name Caldbeck comes from the Norse for a 'cold stream', and it was the Beck that provided water power for the mills that brought employment to the village for hundreds of years. There were mills for fulling, grinding grain, making bobbins, producing woollen cloth, milling flax, making paper, and helping produce beer.

For all the importance of milling in Caldbeck's history, it was mining that really brought prosperity, The local fells are rich in deposits of copper, lead, and baryte, plus silver, gold, zinc, tungsten, and more. So rich, in fact, that in the 16th century it was said that 'Caldbeck and Caldbeck Fells are worth all England else'.

Mining the fells was a major industry from the 13th century but rose to its height in the 17th century. Among the most celebrated reminders of the mining heritage of Caldbeck is the circular Roughton Stone, found in the churchyard. The stone was used to process minerals from nearby mines in the 19th century. It is named for the men and women who extracted minerals from Roughton Gill for over 4 centuries, many of whom lie buried in the churchyard. 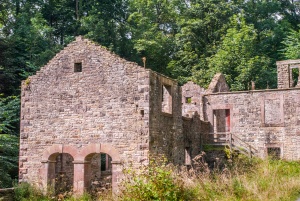 Just below the church is Priests Mill, a restored water mill with a fully working wheel. The mill now houses a cafe and shops.

Sometime in the 6th century, Kentigern (otherwise known as St Mungo) began to convert residents of the Caldbeck area to Christianity, baptising them in the waters of a holy well near the beck. The well still stands behind the later church, beside the river. There was a small stone church, or cell, near the holy well.

Monks of Carlisle later established a hospice for travellers here, but in 1112 this ancient building was replaced by St Kentigern's church. The chancel was rebuilt in 1512 at the same time as a chantry chapel was erected for the family of John Whelpdale.

Much of the building we see today is the result of a Victorian restoration, but the church retains its 14th-century font, and pieces of Norman carved stones have been reset over the tower door. Another Norman doorway is inside the porch, though this seems to have been moved from its original position elsewhere. Inside the porch are a medieval grave slab and a holy water stoup. There is a 13th-century piscina, and wall paintings dated 1731. On the west wall is a royal coat of arms to George IV. 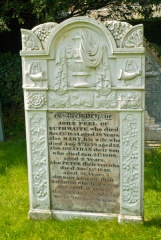 John Peel was born at Park End, just outside Caldbeck, in 1776. He married advantageously, which provided him with a comfortable income. Though nominally a farmer, he spent most of his time indulging his passion for hunting. He kept a pack of foxhounds and also hunted hares and pine martens, sometimes on horseback but just as often chasing his hounds on foot, a custom known as 'Chasing the Ace' in Cumberland folklore. Among Peel's large circle of hunting friends was John Woodcock Graves, who wrote a song about Peel's hunting exploits called 'D'ye ken John Peel?'.

The song, in Cumbrian dialect, was later published in several different versions and set to the tune of the Scottish song Bonnie Annie. Peel became a minor celebrity locally, but the song really gained popularity long after his death in 1854 after a fall while hunting. He was buried in the churchyard of St Kentigern's Church in Caldbeck, under a gravestone carved with hunting symbols.

Mary Robinson (The Maid of Buttermere)

Mary Robinson was born in 1778. Her father was the landlord of the Fish Inn in Buttermere village. She was a celebrated local beauty, and the pretty landlord's daughter caught the eye of John Hatfield, who claimed to be 'Colonel Hope', brother of an Earl.

The couple were married, and the romantic tale of an earl's brother and a publican's daughter caught the public imagination. The story was reported widely and poet Samuel Taylor Coleridge wrote a story in the London Morning Post about the romantic match.

The romance did not last, for Hatfield was soon reported to be an impostor, a convicted forger, and what is more, he was already married. Hatfield was captured, escaped, and recaptured. He was tried for forgery and hanged in 1803. As for Mary, her plight prompted a public subscription on her behalf. She married again, to a local farmer, and had 4 children. She died in 1837 and was buried at St Kentigern's church in Caldbeck. 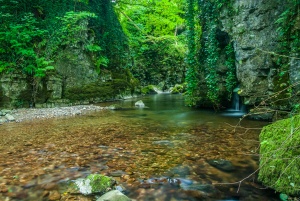 A path near the churchyard leads on an easy 10-minute walk beside the Cald Beck to The Howk, a limestone gorge and waterfall. The steep-sided gorge is best visited in autumn or winter when the greenery has died back, but it is spectacular at any time of year.

Along the path that leads to The Howk, you pass the remains of a 19th-century bobbin mill. The Caldbeck mill was erected in 1857 at the outflow of The Howk, to take advantage of the swiftly flowing water. The mill was powered by an exceptionally large water wheel measuring 42 feet 5 inches, making it the second-largest in the country.

Wood for the mill came from ancient coppiced woodland in the surrounding area, brought by horse and cart. The mill not only made bobbins used in spinning and threading by the cotton industry, but produced brush handles, mole traps, clog soles, axe handles, and washing dollies. Between 40 and 60 local people were employed at the mill, which stayed in operation until 1924. Bobbin milling was once a major employer in the Cumbria region, and you can see a fully restored working mill at Stott Park, on Lake Windermere.

The most famous incident in the history of the Caldbeck Bobbin Mill came in 1882 when a bobbin turner named Anthony Turner became involved in a fight with his son John. During the fight, another worker named Alexander Aitken was killed. Both Proctors were charged with murder. Charges against the son were later dropped. The father was tried for manslaughter but acquitted in November 1882.

The village gives good access to several popular walking routes. The nearest fell is High Pike, which can be reached via paths from the village. The Cumbria Way long distance footpath runs through the village, and the cycling paths known as the Reivers Route and the Coast to Coast trail run nearby. 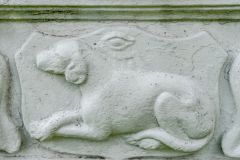 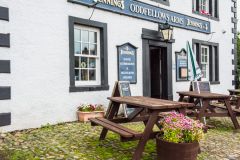 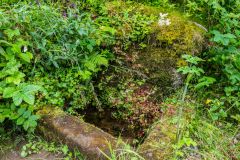 More self catering near Caldbeck >>

More bed and breakfasts near Caldbeck >>