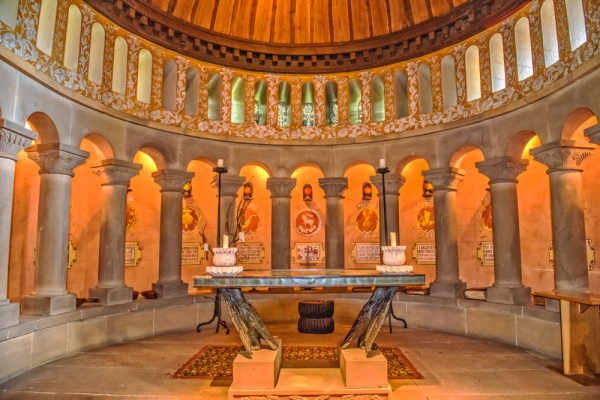 The M6 thunders through the rural parish of Wreay, just south of Carlisle, but most of the many motorists never realize they are passing close by one of the most astonishing little churches in England, and certainly one of the most idiosyncratic.

Unlike most churches, St Mary's church at Wreay is largely attributable to one person. Sarah Losh (1785-1853) was the daughter of a successful ironmaster and chemical manufacturer named John Losh, whose family moved to the area and resided at Woodside house, just to the north of Wreay.

Sarah was very close to her sister Catherine, and when Catherine died unexpectedly in 1835, Sarah set out to rebuild the run-down chapel at Wreay in her memory. A touching tale, no doubt, but not overly remarkable so far.

But wait, it gets better! Rather than hire an architect, Sarah Losh took on the job herself. Aided by a group of local craftsmen, she set about creating a new church that reflected the classical knowledge she had gleaned from a Grand Tour of Europe undertaken with her sister many years before. 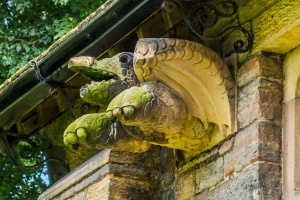 A fanciful flying tortoise
carving on the north wall

The result is an extraordinary church, influenced by Italian and French Romanesque style, but also by Sarah Losh's very personal interest in nature and religious symbolism.

At first glance, St Mary's appears a simple building, composed of only a nave and rounded chancel, with a west bellcote. A closer look, however, reveals a wealth of original detail. For a start, the bellcote is surmounted by a stone eagle, and the west gable is pierced by a long row of tiny round-headed windows. There are more tiny windows under the eave of the chancel, which looks extremely unlike anything elsewhere in England.

There are gargoyles in the shape of creatures such as a crocodile, alligator, serpent, and tortoise. In the churchyard stands the Losh mausoleum, where the white marble figure of Catherine Losh contemplates a pine cone, the symbol of eternity. Near the mausoleum is a large stone copy of the Bewcastle Cross, erected by Sarah Losh in memory of her parents.

The interior is quite exceptional, with a multitude of carvings in wood and stone. The nave is rectangular, with plain walls illuminated by a clerestory. But your eye is drawn through the chancel arch to the apse beyond, where a colonnade of round-headed arches rings the curving outer wall. The arches are separated by rounded shafts topped by carved capitals, with stone sedilia, or seats, set between.

The nave is decorated with a wonderful - or bizarre, depending on your inclination - collection of wooden carvings, many symbolizing the ongoing struggle between life and death, or darkness and light. There are pinecone symbols everywhere you look, and the pinecone's opposite, arrows, the symbol of death. There are carved angels, and a chrysalis transforming into a butterfly.

There are two lecterns, one in the shape of a pelican, the other an eagle. There is an alabaster font with panels carved by Sarah Losh, whose portrait hangs on the west wall.

It is hard to imagine a more personal expression of faith outside a private chapel than Wreay church. The church is open to visitors during daylight hours. It stands directly opposite the village green in Wreay and is just a few minutes off Junction 42 of the M6.

I am so pleased that we finally managed to visit Wreay. It is an extraordinary church, even for a died-in-the-wool medievalist like me. The exceptional quality of the church furnishings and the personal, quirky decoration makes Wreay church a one-off, a must-see historic building, unlike any other church I have visited in northern England. 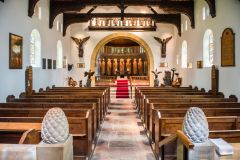 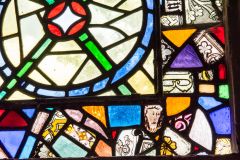 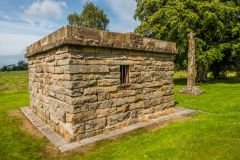