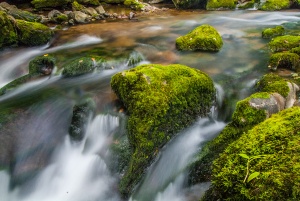 The top of The Howk
The pretty north Lake District village of Caldbeck is known as a walking centre, and for its association with huntsman John Peel. But there is another reason to visit; just outside the village is The Howk, a spectacular limestone gorge and waterfall.

The Howk is reached by way of a signposted riverside trail from path crosses over the village centre. The walk takes only 10 minutes, and the going is fairly easy. On the way you pass the remains of an old bobbin mill which had at one time the largest overshot wheel in the country. Immediately beyond the mill, the river narrows to form The Howk.

The thunder of the water is quite deafening, but to get the best out of your view you would be advised to come in the Autumn or Winter. At other times of the year the growth of greenery can obscure the view of the falls.

While in Caldbeck take the time to stroll along the river to the parish church. There you will find the grave of John Peel, made famous in the song 'D'ye ken John Peel?', written by Peel's friend John Graves in 1832. Peel's monument is adorned with hunting paraphernalia and carved with likenesses of dogs and hunting horns. Also in the churchyard is the grave of Mary Robinson, the 'Beauty of Buttermere'.

About The Howk Waterfall
Address: Caldbeck, Caldbeck, Lake District, Cumbria, England
Attraction Type: Countryside - Waterfall
Location: Park in the village car park. Take the path at the far end of the parking area, turn left and cross the road. Follow the path marked on the end of the house opposite for about 1/2 mile. The falls are just beyond the remains of the bobbin mill.
Location map
OS: NY319397
Photo Credit: David Ross and Britain Express

Nearest Accommodation to The Howk Waterfall:

More self catering near The Howk Waterfall

More Hotels near The Howk Waterfall

More bed and breakfasts near The Howk Waterfall

Self Catering near Caldbeck