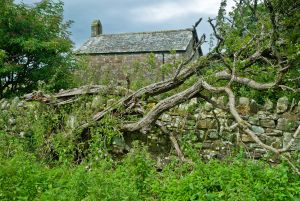 The Old Church at Ireby stands alone in a farm field well outside the village. This ancient structure is an antiquarian's delight. It was built in the 12th century, but when the new church dedicated to St James was built in 1847, the nave, porch, and north aisle of the old church were pulled down and the two-bay chancel was left to moulder away on its own.

The medieval font, piscina, and a few carvings were transferred to the new church, and stones from the nave were used to build the new church.

A pair of 13th-century nave arcade pillars were removed and for many years they served as gateposts for a village house. They have now been returned to the churchyard where they stand like Roman columns near the west door. Their location is not random; the original column bases were uncovered during excavations, and in 1972 the columns were replaced atop their original medieval bases.

It takes some imagination to visualize what the original church must have looked like when you see the columns standing in the open air outside the truncated church building! Also in the churchyard are a pair of cross bases which probably date to the medieval period.

As you approach the church across a farm field the first thing you notice is the east end, which has three lovely round-headed lancet windows. These date to about 1170 and are separated by Transitional Norman capitals. Set beside the windows are some very rough carved crosses that may have originally been cross slab gravestones. The style of the carvings suggests that they might well predate the Norman origins of the church.

Entry is through a west door, over which is a worn 12th-century tympanum. The interior is very simple; a single cell filled with modern benches which somewhat obscure a series of 17th and 18th-century memorials against the walls.

NB. Finding the Old Church can take some doing. If all else fails, ask a local - that's what I did!