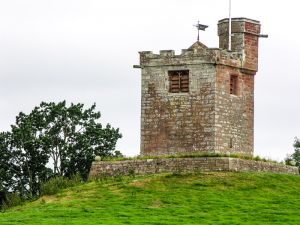 Kirkoswald is a small village known for its ruined castle. The ruins are now overgrown, but the traces of the moat are clearly visible, and one crumbling tower still stands. The small, two-aisled 12th-century church is unusual in that it has a detached bell tower situated 200 feet away on the top of a hill overlooking the village.

The tower may have been built in such an odd position in order to better warn villagers of approaching Scottish raiders. The tower is a very obvious landmark, easily visible from nearby roads. So easily visible that I came around a corner of the road, spied the tower, and immediately pulled off the road to photograph it.

St Oswald's Well is built into the wall of the church, and it is thought that the source of the well is a stream running under the nave of the church. In the village is The College, a reminder that St Oswald's church was once a collegiate church, with a college of priests established by the Dacre family, lords of the manor. The College was built in 1450 as a pele, or fortified tower. After the college of priests was dissolved in the Reformation the tower became a residence for the Fetherstonehaugh family.

The village is named for Oswald, King of Northumbria, whose body is thought to have been taken through the village en route to burial. It gained a market charter in the 13th century, but unlike many market settlements, it never developed into a town. There are 2 pubs on the Market Place; the Fetherston Arms and the Crown Inn.

This small castle was built around 1210 but was ruinous a century later. The fortifications were rebuilt in the 15th century when a moat and wall were added. When the Dacre family joined the Rising of the North their possessions, including the castle, were forfeited to the crown. The castle was later granted to Lord William Howard but allowed to fall into decay by the early 17th century.

Stone from Kirkoswald was used to build Naworth Castle, leaving only a single tower. That tower, however, is impressive enough to give some idea of how imposing the castle would have looked for it stands 60 feet high and features finely carved doorway openings. You can easily make out the earthworks and moat that still encircle the castle. The castle tower stands almost hidden by a stand of trees, to the south east of the village, off the minor road to Busk.

More self catering near Kirkoswald >>

More bed and breakfasts near Kirkoswald >>