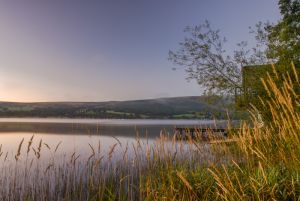 Dawn over Ullswater at Pooley Bridge

Pooley Bridge is a popular village at the northern terminus of the Ullswater Lake Steamer route. There are walking trails along the shore of Ullswater, and nearby are the remains of a prehistoric hill fort.

The village name means 'hill by the pool' and comes from a large pool in the River Eamont and Dunmallet, or Dunmallard, a conical hill that rises on the far side of the river. The 'bridge' comes from the late 18th-century bridge across the river. The 3-arch bridge was erected in 1764, according to an inscription on a parapet stone. It replaces a much earlier bridge dating back to the late 16th century.

The village is very popular with tourists, especially during the summer months. As a result, there are several hotels and inns, including the Sun Inn, created from a row of 17th-century cottages.

St Paul's church was built in 1868 as a daughter church of St Michael's in nearby Barton. It was felt that a new church was needed in Pooley Bridge to deal with the large numbers of tourists flocking to the area in the late Victorian period. Pooley Bridge did not become a parish in its own right until 1905 and still maintains close links with Barton.

There is an Iron Age fort on the summit of Dunmallet and a circular earthwork fort at Maiden Castle (not to be confused with the much larger site in Dorset). The Maiden Castle site is in a farm field at grid reference NY452243, a mile west of the village. As for Dunmallet, it can be reached via a footpath from the far side of the bridge. The walk is described by Alfred Wainwright in his book The Outlying Fells of Lakeland, as a 'simple after-dinner stroll'. 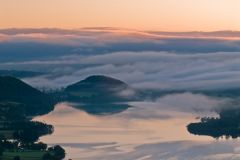 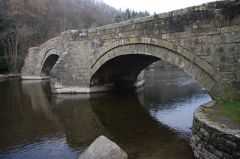 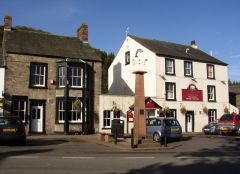 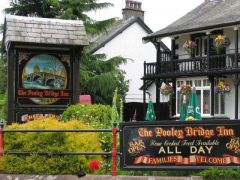 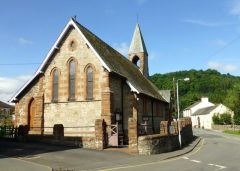 More self catering near Pooley Bridge >>