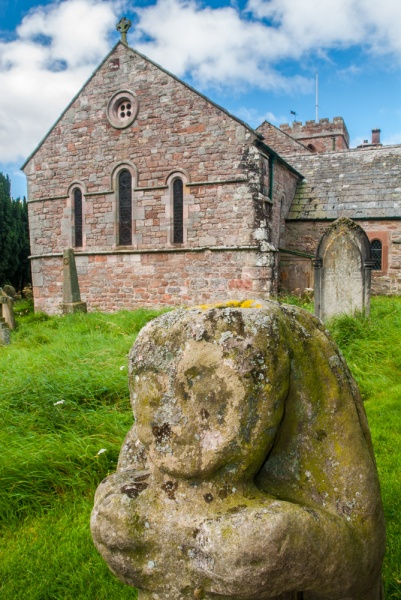 A bear statue in front of Dacre church

Summary
A fascinating ancient church famous for its statues of four bears, one in each corner of the churchyard. St Andrews is built on the site of a monastery mentioned by The Venerable Bede. In the interior are a Viking grave monument and a cross shaft, and monuments to the Hasell family of Dalemain. A lock on the south door bears the initials of Lady Anne Clifford, countess of Pembroke.

The church is largely 12th century, with additions in the 15th and 19th centuries. From the churchyard, there are good views to the battlements of 13th century Dacre Castle, a pele tower (fortified house) that is in private hands. 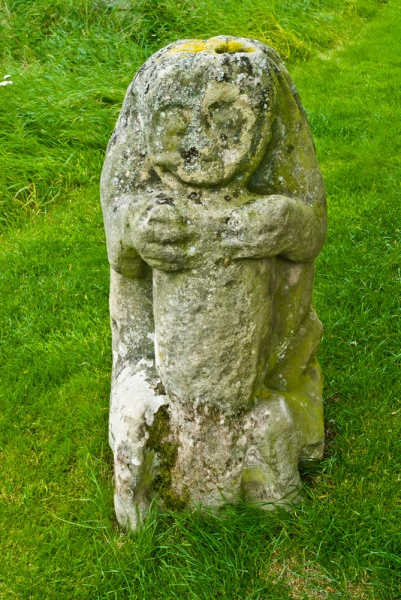 Another of the peculiar bear statues

What do the bear statues represent? Well, no one is quite sure. Various attempts to explain them have been made, among the most plausible is the hypothesis that the four statues represent stages in a story. In the first stage, a bear stands alone.

In the second stage, an animal approaches the bear from behind. In the third stage, the bear and the creature wrestle. The fourth and final stage shows the bear by itself, a satisfied smile on its face.

The inference is that the bear has eaten the mysterious animal. The tale may seem a strange one for a churchyard, though it could be argued that the tale is apocryphal and the bear and creature represent religious ideals. The truth is, we don't know what the statues mean, and that is part of their undoubted appeal.

The church is built on or near the site of a monastery mentioned in Bede's Ecclesiastical History. There is no trace of the monastery remaining, but there are two reminders of the later Viking period within the church. These are two beautifully carved cross shafts, one dating from the 9th century, the other, larger, dating from the 10th or 11th century. The smaller, older cross fragment is carved on four sides. The best preserved of the carvings represents a winged lion with a serpent head. 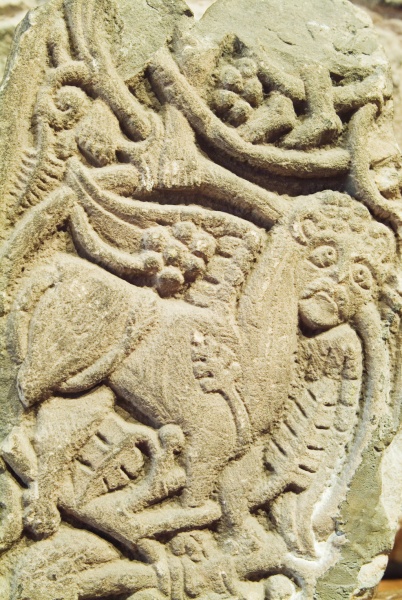 The larger cross is a fascinating piece of 10th-century art. It stands, propped against the wall of the church, exposing a narrow set of panels, each carved with intriguing characters. The topmost panel shows a beast above two figures clasping hands. Beneath the hands is a small table. It is suggested that the figures are a reference to the Biblical story of Abraham and Isaac. Below this panel is one showing a stag with a hound on its back.

This hunting theme was a common motif in the Viking period, and may also have had religious intent. The lowest panel is quite beautifully sharp and clear. It shows a large tree, with two figures beneath it. One figure is reaching up to the tree. This has been suggested as a depiction of Adam and Eve in the Garden of Eden.

Aside from the Viking cross shafts, there is plenty of interest at Dacre. The simple timber-frame ceiling is quite wonderfully wobbly and deformed after centuries. In the sanctuary is a 13th-century tomb of Lord Dacre, carved in local red sandstone.

On the south door is a lock given to Dacre church by Lady Anne Clifford in 1671. The lock still has its original key, and if you look you will see Lady Anne's initials on the lock - A.P. for Anne, Countess of Pembroke. A much more recent feature is a 1992 memorial window dedicated to Sylvia McCosh of Dalemain House. This lovely window features Lakeland landscape etched in frosted glass.

Dacre is easily accessed off the A592 just 4 miles west of Penrith. There is parking on the verge, and the way is level. The churchyard was overgrown in places when we visited, so a pair of wellies might be in order if the weather is damp.

We found the bear statues fascinating - they are child-sized, and proved a big hit with our children. We came mainly to see the bears, but the interior of St Andrews proved to be an unexpected delight. The carved crosses were quite wonderfully preserved, and we enjoyed ourselves immensely. Recommended. 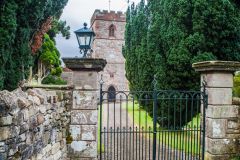 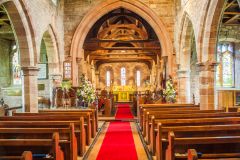 Self Catering near Dacre