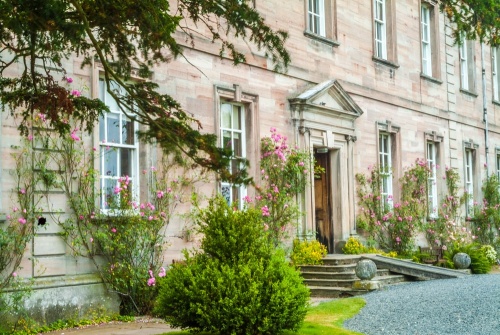 The smooth Georgian front belies the medieval heritage of Dalemain, home to the same family since 1679. The house is built around an inner courtyard, and the interior rooms are a charming mixture of formal Georgian rococo and panelled Elizabethan. Take a break in the medieval hall, now the tea room.

There has been a house on this spot since at least the Saxon period. At the time of Henry II (1154-1189) a pele tower (fortified tower house) stood at Dalemain, and in the 14th century, a manor hall and second tower were added.

The house was expanded again in the 16th century with the addition of wings on each side of the main house block, creating a partially enclosed courtyard. The courtyard was closed by the addition of a Georgian front in 1744.

Only four years later the final major addition was added, when the garden frontage was altered to match the Georgian front of the house. And so Dalemain has stood, essentially unchanged, for over 250 years. 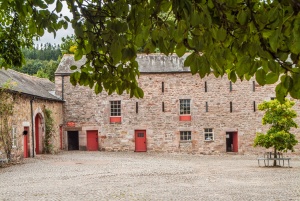 The courtyard and barn

Dalemain offers an intriguing combination of medieval, Tudor, and elegant Georgian styles. The medieval core of the house is the hall, which dates to the 15th century. This is now the tea room, so it can be a little difficult to admire the architecture.

Much of the house is Tudor, with some lovely panelling and plastered ceilings. Then there are the elegant Georgian state rooms, the chief of which is the Chinese Room, featuring hand-painted 18th-century oriental wallpaper. There are lovely pieces of period furniture throughout, but a charming touch are the children's toys and doll houses.

There are also several mementoes associated with Lady Anne Clifford, one of the most powerful and influential figures in the post-medieval history of northern England. Sir Edward Hasell of Dalemain held the post of Chief Officer to Lady Clifford, Countess of Pembroke, and there are several gifts by Lady Clifford to Sir Edward on display. 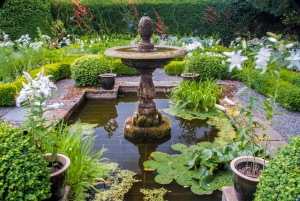 Himalayan poppies mark the beginning of summer at Dalemain, but there is plenty to see year-round in these 5 acres of plantsman's gardens. There is a Terrace walk dating from the 1680s, with a profusion of 100 old-fashioned roses, and varieties of ancient apples. There is a Tudor Knot Garden, a wild garden, and the largest Abies cephalonica (silver fir) in Britain. The site is quite sheltered, and the atmosphere is quiet and peaceful.

There are small, formal terraces near the house, giving way to a series of formal and informal hedged garden rooms. I've mentioned the Tudor Knot Garden, but there is also a Rose Walk, featuring over 150 varieties of old-fashioned roses, a shaded Gazebo, Children's Garden, and woodlands.

The Children's Garden features plants with animals in their names, and the signposts are wooden animal likenesses. And finally, there is the Low Garden, with a quiet pond and walks along the river. 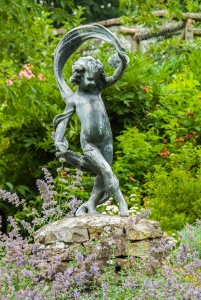 A statue in the garden

One side of the courtyard at Dalemain is occupied by a magnificent 16th-century barn, built atop even older cloisters. This lovely building houses an exhibition of rural crafts and agricultural machinery from butter churns to old farming equipment.

Take a step back in time and see how people lived and worked in this area over the centuries. In the same building is a fell pony museum, with displays of equipment, harnesses, and pictorial exhibits tracing the history of the fell pony in the north country.

Taking up the lower story of the Pele Tower is this museum dedicated to the Westmorland & Cumberland Yeomanry, a regiment founded in 1819 and disbanded after WWI.

Dalemain is located on the A592, which, despite being an 'A' road, is more like a country lane at this point, one mile beyond the northernmost tip of Ullswater. Or, if you are coming from Penrith, take the A66 Keswick road, and branch off onto the A592 after one mile. Dalemain is about 2 miles on, on the right. There is free parking, and easy, level access to the house.

A wonderful garden and a fascinating house, full of treasures. The location is superb, and the gardens, though small by comparison to some larger estates, are well worth wandering through. The hedges and garden rooms created an enjoyable family experience, with plenty of hidden garden areas for children to explore.

The rural crafts museum proved very popular but best of all were the doll-houses. Our children had a wonderful time exploring Dalemain, and the staff were very pleasant and helpful, making our visit one to remember. 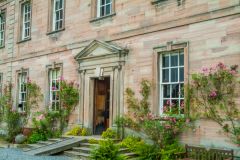 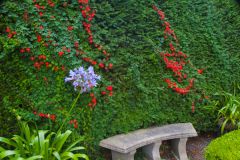 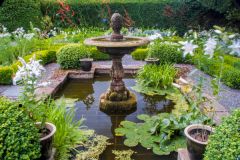 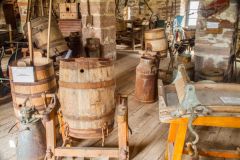 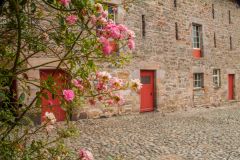 More self catering near Dalemain

More bed and breakfasts near Dalemain