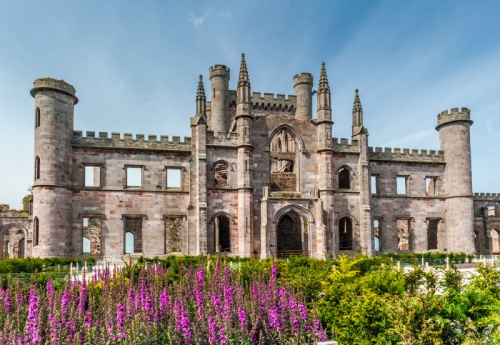 The roots of Lowther Castle go back to the 14th century, when Edward III granted Sir Hugh de Lowther a charter to enclose a 200-acre tract of land for a deer park beside the River Lowther. Sir Hugh built a motte and bailey fortification beside the river, but later in the 14th century this was replaced by a pele tower to better defend against Scottish raiders from north of the border. Another tower was added in the 16th century, and the following century a central block joined the two towers. 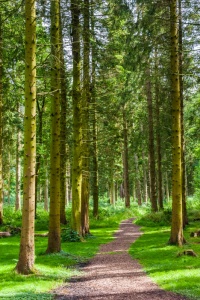 A woodland path in the
iris garden / heronry

The medieval building was torn down in 1691 and replaced with a grand Jacobean residence, but a devastating fire in 1718 left much of the house a ruin. And so it remained until 1806 when the Earl of Lonsdale called in architect Robert Smirke to create an impressive new house in the style of a medieval castle, incorporating the earlier ruined house.

Lowther was Smirke's first major commission, but at the age of 25 he already showed the skill that would lead him to design the British Museum in London some years later. No expense was spared, and the finished house was described as 'magnificent' by contemporaries.

Alas, social changes in the 20th century meant that the great age of the country house was over. Lowther Castle was closed in 1936 and the garden was paved with concrete and used by the military for secret tank testing during WWII. The roof was removed in 1957.

And so it stood, the great house an empty shell, the elegant, empty rooms open to the sky, while the garden was used as a chicken farm and the grounds harvested for timber. 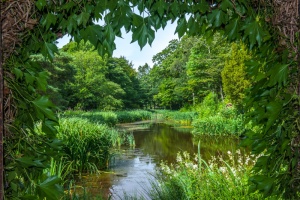 Jack Croft's Pond from the summerhouse

For 70 years the castle decayed, until a charitable trust was established to restore the castle and grounds as a visitor attraction. The castle opened in 2011 after an initial restoration costing £9 million. The stable courtyard has been converted into a modern visitor centre with a cafe and shop.

The gardens at Lowther are like a timeline of the historic English garden, with contributions to the design from such luminaries as Colen Campbell, Capability Brown, and William Gilpin. Each new design was layered onto the past, making Lowther's gardens a fascinating study in changing fashion in landscape and formal gardening.

The oldest feature is the Yew Avenue, laid out in the early 17th century. The oldest yew is believed to be 350-400 years old. Above the Yew avenue is a Pinetum with 19th century firs, cedars, and hemlocks.

The most fascinating garden area to my eye is the Rock Garden, with winding paths twisting around flower beds laid out around a central pond. Stone seats provide a quiet place to sit and soak in the lush green atmosphere.

A short distance from the Rock Garden is the Escarpment Walk, a turf trail running along the edge of a steep cliff with wonderful views across the Lowther Valley to the west. Perched beside the Escarpment is a summerhouse built for the Jubilee of Queen Victoria in 1897. It was here that HRH Queen Elizabeth II and Prince Philip picnicked while visiting the castle. Hopefully they enjoyed what has been called 'the finest view in the Lake District'. 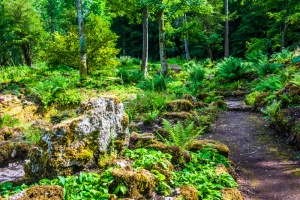 Immediately in front of the house is a formal parterre, with yew hedges defining beds of grasses and perennial plants to suggest a tapestry design.

Frankly, I was amazed at Lowther Castle. The shell of the castle itself is an extraordinary building; the very epitome of a fantasy castle, with eye-catching turrets and crenellations creating an imposing and elaborate structure that looks like it was built for a Hollywood film set.

Though the castle has obviously suffered from the passage of time and neglect, enough remains to show what a remarkable building it was and how extraordinary it will be to visit when restoration is complete.

The gardens at Lowther would be worth a visit even without the added attraction of the castle. Large parts of the planted areas have been overgrown so that it is sometimes hard to imagine what they might have looked like when new, but enough remains to excite your imagination.

Each garden area has an information panel, many with old photos showing how the garden looked, or with original plans explaining how it was laid out. Though a great deal of work obviously remains to be done, it is fascinating to see the gardens in the process of being restored, and imagine what they will look like when restored to something approaching their former glory. 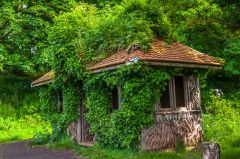 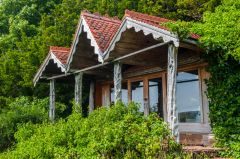 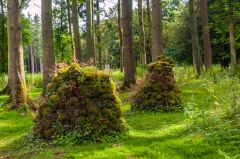 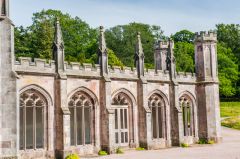 More self catering near Lowther Castle