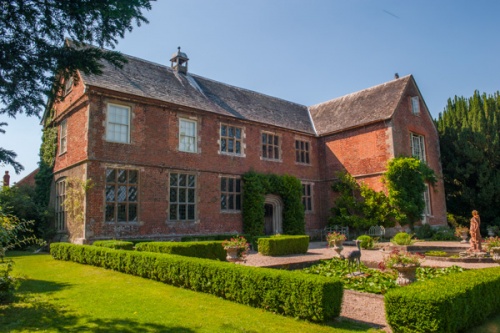 Hellens Manor
An endlessly fascinating manor house with medieval origins, Hellens has resident ghosts (of course), relics of Anne Boleyn, a room prepared for a potential visit by Mary Tudor, a wonderful collection of portraits, and lovely gardens with a labyrinth, knot garden, dovecote and pond. 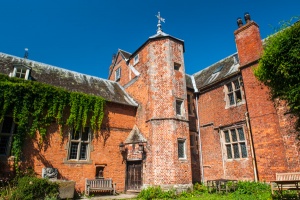 The Hellens we see today is primarily a Jacobean house, built of red brick, set around a cobbled courtyard, with attractive gardens to the rear. It has been in the hands of the same family for 700 years, though the family name has undergone several changes since it was built in the early 13th century.

Hellens was built by Yseult (Isolde) Mortimer Audley in the early 14th century. She appointed Walter Helyon as her steward, and the house takes its name from 'Helyon'. Walter Helyon's astonishing painted effigy lies in the parish church of Much Marcle as does that of Isolde Audley and her husband Hugh, Lord Audley.

Yseult Audley was the sister of Roger Mortimer, lover and briefly co-ruler with Queen Isabella during the minority of Edward III. Isabella and Mortimer made their headquarters at Hellens in 1326 when they rebelled against Isabella's husband, Edward II. Accompanying the queen and Mortimer at Hellens was Isabella's son, Prince Edward, later Edward III.

Isabella's bid for power succeeded, and Edward II soon met a grisly end in prison at Berkeley Castle. However, it was not long before Prince Edward shook off the maternal reins and took power in his own right. He had Mortimer put to death for treason and it seemed as though the Queen and Yseult Audley might follow. 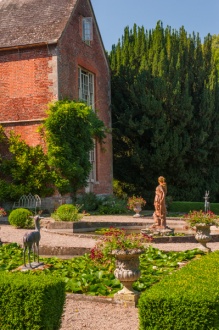 However, Edward not only spared his mother and her former hostess, but Yseult's son James was educated with Edward III's own son, the Black Prince, and became fast friends with the prince. He fought with the prince at the Battle of Crecy in 1346, and when Prince Edward journeyed through the Welsh Marches n 1347 he stayed with James Audley at Hellens.

In honour of the visit, James Audley built a fine stone fireplace in the small banqueting hall, carved with the prince's crest of three white feathers that he won at Crecy. Visitors to Hellens can still see the crest and the massive stone table at which Audley feasted with the Black Prince.

During the 14th century, Hellens might best have been described as a small castle rather than a manor, but in the late medieval period the family fortunes took a downward turn (both figuratively and literally) and the house suffered as a consequence.

The staunchly Catholic Audleys lost influence during the Reformation, then their descendants favoured the Royalist cause in the Civil war and they suffered again. Cromwell's soldiers ransacked the house and killed the family chaplain, and the owner, Fulke Walwyn, ended his life a penniless street-sweeper in Hereford.

Things were not much better for Fulke's granddaughter Mehettable (or Hetty) Walwyn. Hetty fell in love with a farm-worker on her family's estates. Not surprisingly, her family forbade the match, and Hetty ran away with her lover. Who knows what happened, but she repented of the match and returned to her family.

If she was expecting to be welcomed back like the Biblical prodigal son, she was sadly and rather tragically mistaken, for her parents locked her in an upstairs room, barred the window, and kept her imprisoned there for the rest of her life. Visitors today can see the windowpane where Hetty Walwyn scratched a poignant verse with a diamond ring; the only possession left to her. 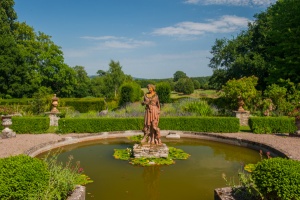 It is a part of Virtue to abstain
From what we love if it shall prove our bane!

Hetty signed her name, and on the outside of a nearby pane the name of her lover, John Pearcel, is scratched. Did he climb the outer wall of the building to see his love one last time?

NB. Some stories say that it was her father who locked Hetty away, some that it was her mother, but all agree on the basic tale; that she sought forgiveness for defying her parents, and was instead imprisoned for the final 30 years of her life.

Hetty's ghost is said to haunt her bedroom prison, but Hellens is the sort of house where a ghost 'ought' to be seen! It exudes an air of age, but unlike too many historic houses, it never feels like a museum, but like a lived-in house, with jumbles of furniture from various centuries lining the walls, floorboards askew, and magnificent Jacobean carvings adorning dark wooden panels at every turn.

Much of the house is today filled with memories of recent owners, including a curving gallery leading off the banqueting hall, lined with paintings by Malcolm Munthe, who took ownership of the house in the 1950s.

Perhaps the most memorable ground floor chamber is the drawing room, with beautiful carved panelling and views over the parterre and knot gardens. The fireplace overmantle is carved with a pattern echoed in the layout of the knot garden.

The most impressive ground floor feature, however, is the marvellous Jacobean staircase, decorated with a frieze of mythical beats. In a display case on the stair is a comb belonging to Anne Boleyn, given by a son of Anne's sister Mary (the 'other' Boleyn girl and also Henry VIII's mistress).

The upper floor boasts several fascinating bedrooms, including one with Spanish leather lining the walls. One of the bedrooms was rebuilt for a visit by Queen Mary I, but there is no record that she ever actually stayed here.

Visits are by guided tour only, on a timed ticket basis. The interiors of Hellens are among the most interesting of any historic houses I've had the pleasure of visiting in England (and that's a lot of houses!). The combination of architectural features, fascinating family history, and historic furnishings makes a tour of Hellens a real treat. 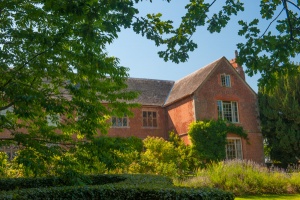 The house from the rear gardens 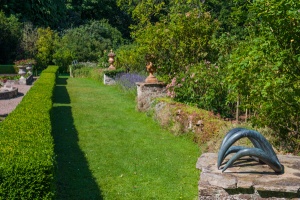 A garden terrace and hedges 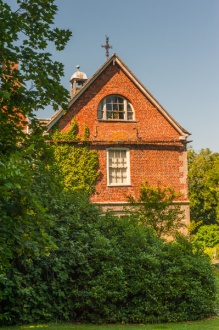 The west side of the house

More self catering near Hellens Manor >>