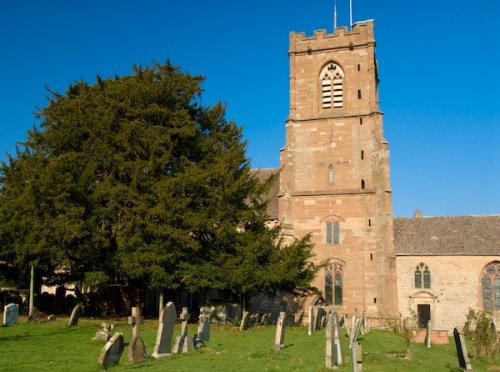 St Bartholomew's Church, Much Marcle.
The yew tree is said to be 1500 years old.

Much Marcle boasts a large church, dedicated to St Bartholomew. The church is composed of a 13th-century chancel and nave, with the addition of a small 14th-century chapel and a very imposing central tower, added in the 15th century. The most notable aspect of St Bartholomew's is the number of superb monuments.

Chief among these monuments is the quite extraordinary painted effigy of Walter de Helyon in the north aisle of the nave. De Helyon was a minor nobleman whose family became owners of an estate in Much Marcle. The name 'Helyon' eventually evolved into 'Hellens', the name of the manor in the village.

Walter de Helyon died around 1350 and is portrayed lying on his back, with his feet resting on a small dog. What really makes the effigy worthy of note is the wonderful vernacular costume. De Helyon is dressed smartly in a jerkin, with a sword by his side and a belt and wallet alongside.

Unlike most surviving tombs, this one is not made of stone, but rather of solid oak painted with gesso. The colours are so vibrant they look as though they had been painted yesterday. It would be nice to think they had survived unaltered in this condition, but actually the gesso was renewed in 1971 to repair damage caused by mould and damp. The finished product is as close as we can guess to what it would have looked like at the time of its creation. 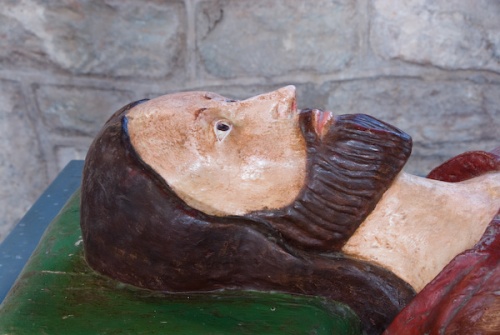 In the chancel is a canopied tomb worth noticing, that of Blanche Mortimer, Lady Grandison, who died in 1347. She was the daughter of the powerful Roger Mortimer, first Earl of March. The carving is superb, with the folds of her gown crisp and clean. Lady Grandison holds a rosary in her hands, and a wimple is upon her head. In his book  'England's Thousand Best Churches', Simon Jenkins calls Lady Grandison's effigy "an image as lovely as any bequeathed us by a medieval church ... a work of supreme craftsmanship".

In the chapel to the north of the altar are two more tombs. Against the far wall is a tomb chest with the side by side effigies of a knight and lady, thought to be Hugh, Lord Audley and his wife Isolde Audley, aunt to Blanche Mortimer, whose tomb we mentioned above. These date from sometime after 1325.

Lord Audley is clad in full armour, with a bassinet upon his head, and his feet upon a lion. Lady Isolde wears a long gown with a high neck, while a pair of mischievous dogs pull at her hem.

The most imposing tomb in the chapel is that of Sir John Kyrle and his wife Sybil, which is located upon a high plinth of black marble, surmounted by the alabaster effigies. This marvellous tomb is dated from 1650. The carving is among the best I have ever seen in any parish church.

The effigies give a wonderful depiction of period costume worn by nobility in the mid 17th century; Sir John wears armour, but his head is bare so that his long locks flow free. From about his feet peers a little hedgehog, the symbol of the Kyrles. The hedgehog stands upon a plinth with the inscription 'NIL MOROR ACTUS', or 'Never Delay a Blow'.

Lady Kryle is clad in a long dress, open to reveal an underskirt. She wears wonderfully carved slashed sleeves and a neck ruff, while lace peers from beneath her cuffs. At her feet is a bear paw rising from a crown, the sign of the Scudamore family. Taken as a whole, the monument is superb and offers a wonderful glimpse of period dress. Above the tomb on the west wall of the chapel is a richly coloured hatchment, where once again the hedgehog and bear paw symbols can be seen.

I've mostly described the interior treasures of St Bartholomew's, Much Marcle, but there is one more treasure here. It is to be found outside the south door of the church. A huge old yew tree stands here, its trunk so large and worn that a bench has been constructed within it. The yew is thought to be at least 1500 years old.

In the village are several examples of the black and white half-timbered buildings for which Herefordshire is famous, and just a short distance from the church is the old manor house of Hellens.

About St Bartholomews church, Much Marcle
Address: Much Marcle, Herefordshire, England, HR8 2NB
Attraction Type: Historic Church
Location: Take the B4024 off the A449 (signposted Dymock). The church is to the right, in the centre of the village. Limited parking on the side of the lane.
Location map
OS: SO 657 327
Photo Credit: David Ross and Britain Express

More self catering near St Bartholomews church, Much Marcle

More bed and breakfasts near St Bartholomews church, Much Marcle