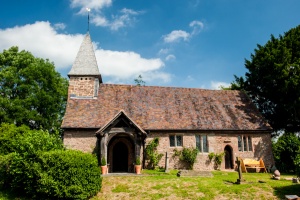 The name Pixley translates roughly as 'Peoht’s glade in the forest', but the forest is long gone, and the tiny church of St Andrew is tucked away behind a farmyard at Pixley Court, hidden from view and invisible to anyone not specifically looking for it. But those who make the effort to find this deliciously ancient building will be rewarded with a glimpse into our rural past.

Why is the church located in such an out-of-the-way location? Well, in the medieval period Pixley Court was a moated manor, and the moat probably encircled both the manor and the church. The Court has since been considerably reduced in size, but it retains a 16th-century cross-wing.

As for St Andrew's, it dates to the late 13th century and consists of just a chancel and nave, with a simple Victorian bell turret at the west end of the nave. The first recorded mention of a minister at Pixley comes from 1278 when the church is mentioned as a chapel of ease for Ledbury.

There is a small south porch, and recent tree-ring analysis shows that the timbers used in its construction were felled in the winter of 1467. Intriguingly, large stones used in the north-east corner of the chancel suggest that it was once part of an earlier building, but if so, no other trace of that structure remains. As you enter, pause for a look at the door; the iron hinges have been dated to the 13th century. 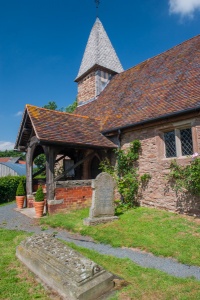 The 15th-century porch
and Victorian turret

Inside, the Victorian influence is tempered by Early English architecture, with slender lancets set into the east wall. But the big attraction at Pixley is the medieval timber work which is everywhere you look. The woodwork is simple, even crude, but ever so appealing! Sturdy timber posts support the bell turret, and tie-beams do the same for the roof, which seems to hover just above your head as you navigate this tiny space.

The most interesting timber work is the screen between chancel and nave. If the term 'screen' conjures up images for you of the medieval painted wonders of East Anglia, then you will find Pixley's screen a rude surprise, for it is very stolid, heavy, and dark with age, with three bays upheld on roughly moulded posts, which extend to the roof timbers at each side.

There seems to some debate over the age of the screen; the official historical records suggest a 14th-century date, but Nikolaus Pevsner suggested that it was much later, perhaps post-Reformation.

There are floor tiles attributed to Arts and Crafts pioneer William Morris, and a wooden parish chest, undated, which to my eye appears to the 17th century. The octagonal font is in Early English style and stands on a plain stem.

It won't take long to explore St Andrew's (did I mention it is tiny?), but its one of those wonderful little county churches where time seems to have stood still for centuries. The timber screen is a marvellous reminder of medieval craftsmanship. 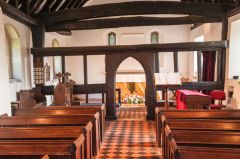 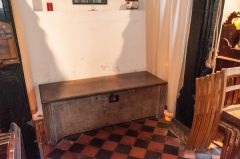 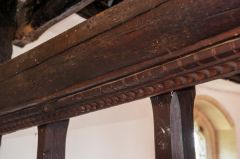 About Pixley
Address: Pixley Court, A4172, Pixley, Herefordshire, England, HR8 2QA
Attraction Type: Historic Church
Location: In the farmyard at Pixley Court, on the east side of the A4172, three miles south of Ashperton
Location map
OS: SO660387
Photo Credit: David Ross and Britain Express

More self catering near Pixley

More bed and breakfasts near Pixley