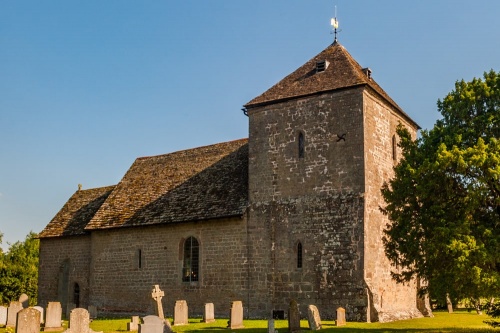 The churches of Kempley
There are two churches serving the small Gloucestershire village of Kempley. St Edward the Confessor is an early 20th century building in the Arts and Crafts style, located, as you might expect, in the centre of the village. The other, St Mary's, is nowhere to be found at first glance. It is located at a distance of a mile or so away from the village, like a lonely sheep lost in a field far from its fellows.

Beginnings
St Mary's was begun around the year 1095 by Hugh de Lacy, a favourite of Henry I, on the site of an earlier Saxon building. Its simple architecture speaks of slumbering antiquity, very much in tune with its lonely surroundings. The church consists of a square west tower with a peaked roof, nave, and a barrel-vaulted chancel. The 12th-century south porch is built of local oak, and is very picturesque. 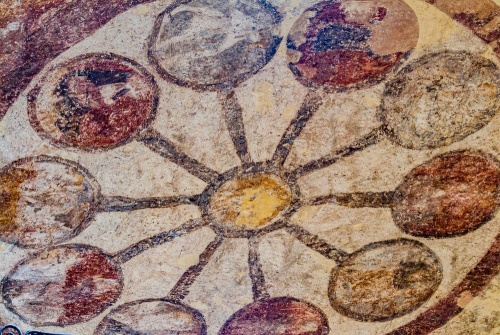 The Wheel of Life painting

The Wall Paintings
The glory of Kempley church is the wealth of superb wall paintings, which make it one of the most enjoyable Norman churches to visit in the country. English Heritage have recognized the value of preserving the wall paintings of St Mary church and have taken over the conservation and management of the church.

There are two groups of paintings at Kempley. The early Norman nave contains 13th-century tempera paintings (made on dry plaster using an emulsified albumen paint). In the tiny barrel-vaulted chancel are a superb series of 12th-century frescoes (painted onto wet plaster).

These date from 1130 and feature Biblical scenes from the Book of Revelations centred on a figure of Christ in Majesty. The figure of Christ is surrounded by symbols of the four Evangelists. A figure of Mary holds what appears to be a church in her hands. 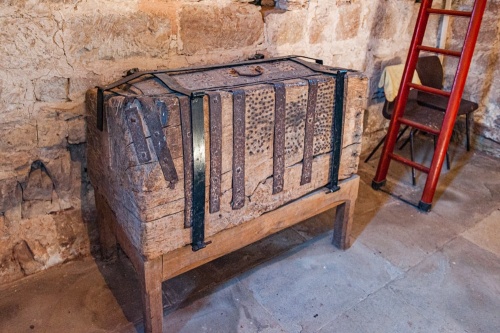 Above all the figures are a wealth of stars representing the Apocalypse. On both chancel walls are figures of the Apostles sitting in judgement, whose heads are turned upwards towards the figure of Christ above them. One standing figure carrying a sword may be a likeness of Sir Hugh de Lacy. A painting of heavenly Jerusalem surrounds a small Norman window.

In the nave, on the south side of the chancel arch is a much-faded representation of The Three Marys at the Sepulchre. This is contemporary with the chancel paintings. The most striking painting in the nave s a circular Wheel of Life, with a series of spokes representing 10 ages of man.

The extraordinary richness of the paintings was preserved when the walls were whitewashed during the Reformation. The paintings were not rediscovered until remodelling was carried out in the 1870s, at which time coats of varnish were applied. This had the unfortunate effect of darkening the paint, so the varnish was removed in the 1950s 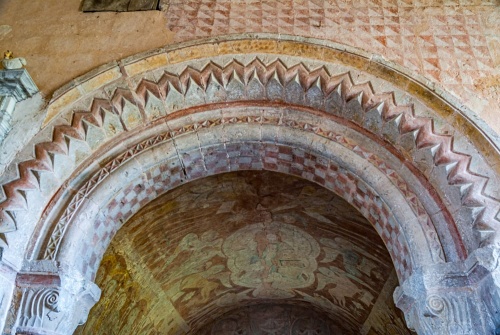 Other highlights
There is more to St Mary's Kempley than the wall paintings, though it is easy to get carried away in awe of the paintings and forget the rest. We've mentioned the lovely oaken porch.

Under the tower is a much worn wooden chest created by hollowing out a single large log. The chest dates to 1492-1522. The west door makes a claim to be one of the oldest doors in England still in use. It has been dated by dendrochronology testing to as early as 1114.

The nave roof dates to 1120 and exhibits the earliest known use of mortise and tenon jointing in England. It is also believed to be the oldest open roof in north-west Europe.

St Mary's offers free entry but is open only from spring to autumn, or at other times of the year by prior arrangement. 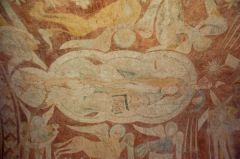 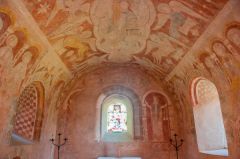 More self catering near Kempley

More bed and breakfasts near Kempley