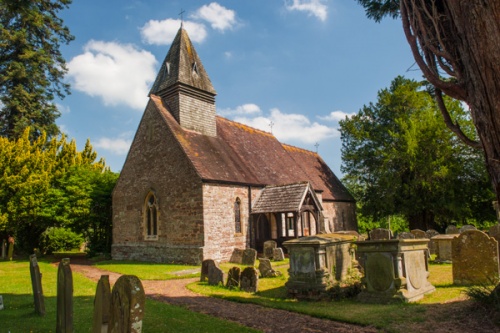 If there is a more delightfully situated country church In England, I want to see it! Putley's church stands in rural splendour, reflected in a small pond, surrounded by tall trees and farm fields. In such an idyllic setting you might expect to find an ancient church, but the current church (dedication unknown) is largely the work of Victorian architect Thomas Blashill of London, begun in 1875.

Blashill's design is a lovely example of 'High Church', or Anglo-Catholic style, incorporating pieces of an earlier medieval church on the site, including several 13th-century windows and a piscina of similar age.

It is unusual to find a church in Anglo-Catholic style that is not an estate church (that is, paid for by the lord of the manor out of their own pocket, as an expression of their own brand of faith).

The rebuilding at Putley could only take place with contributions from several parties, including the Incorporated Society for Promoting the Enlargement Building and Repairing of Churches and Chapels (later The incorporated Church Building Society), who granted 20 pounds on condition that all seats except 5 in the Putley Court Pew be kept available as free seating for the inhabitants. 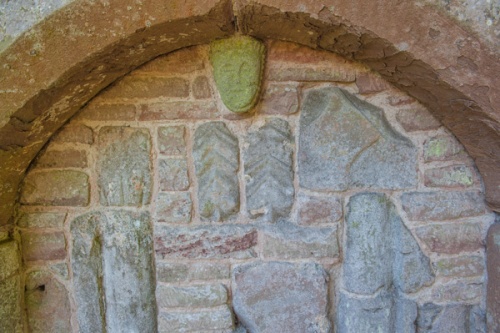 There is evidence of a much earlier church in the blocked north door, where you can see several Romanesque carved stones, including a carving of a human head and several more pieces with traditional Norman chevrons. A Roman villa stood near this spot, and fragments of Roman brick are also reused in the north doorway blocking material.

This north door appears to have been the main entrance into the Norman church. Near the doorway, you can make out a holy water stoup, which would have been used by worshippers entering the church. By contrast, the south door appears to date from the 13th or 14th century. A porch was added in the 16th century but this was replaced by a modern replica in 1958.

There was no church recorded here at the time of Domesday Book, so the first church we know about was built by a Norman lord, William d'Evreux, around 1100. D'Evreux was a tenant of Roger de Lacy, one of the most powerful lords in the Welsh Marches. D'Evreux later granted the living of Putley to Hereford Cathedral.

On the south side of the chancel are broken pieces of the Norman piscina. These were found built into the south wall and have now been placed close to their original site. The north chancel window is original, as is the easternmost nave window. 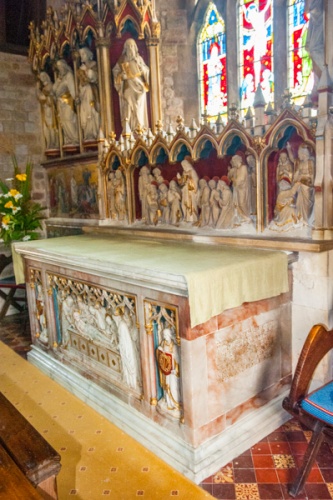 The Victorian restoration reused pieces of the medieval Putley Court squire's pew to create the screen and pulpit. The highlight of the Victorian work, however, is the ornate high altar, made of alabaster, and incorporating the earlier wooden altar within it. The altar was a gift of John Riley in memory of his mother.

Above the altar rises a simply wonderful reredos of mosaic and alabaster, carved by the London craftsmen Farmer and Brindley. The same carvers were responsible for the choir stalls. The stained glass windows are all by Clayton and Bell, except the west window, which is by Heaton, Butler and Baque.

In the churchyard just outside the chancel is a medieval cross and base, probably 13th century and made from dressed sandstone. The cross head shows carved figures facing the four cardinal points of the compass, with a Crucifixion scene on the west face, a Virgin and Child on the east, St Andrew on the north, and a bishop on the south.

The presence of St Andrew might suggest that the original church here was dedicated to him, but all evidence of the original dedication has been lost.

Also in the churchyard are nine Georgian box tombs and an unusual War Memorial carved from oak and teak. 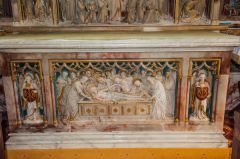 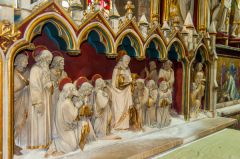 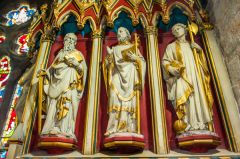 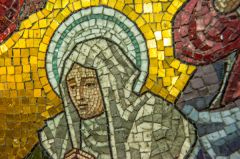 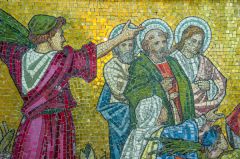 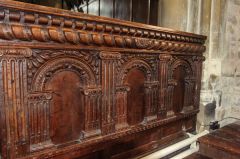 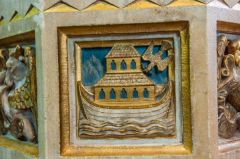 More self catering near Putley

More bed and breakfasts near Putley