HERITAGE HIGHLIGHTS:   The 14th-century Fleming Brass is one of the largest in England 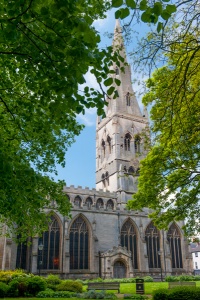 The church of St Mary Magdalene was begun around 1160, though much of what we see today dates to the 14th and 15th centuries. The nave is late 14th-century work, and the chancel dates to 1489. The tower and striking spire are 13th century, and the building was extensively restored in 1855.

Thankfully the Victorian restoration did not overwhelm the wonderful medieval underpinnings of this impressive Grade I listed building. The spire rises to 236 feet, making it the highest in Nottinghamshire.

The Hole in the Spire

You are never very far from a reminder of the Eglish Civil War in Newark, and St Mary's follows that trend. From certain angles you can see a hole in the striking spire, and if you stand in just the right spot you can look straight through the hole and see daylight on the far side.

According to local legend, the hole was made by a musket ball during the Civil War siege, though there is some doubt whether the story is based on fact.

I can personally vouch for the fact that some locals believe it; as I was photographing the church exterior for this article I was buttonholed by a very friendly local man who insisted that I walk to just the right angle to see the hole in the spire, and he related the tale of the Civil War musket ball as if it had happened yesterday. 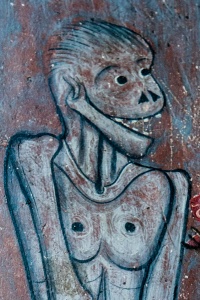 A panel from the
Dance of Death,
Markham Chantry

The Dance of Death

If the exterior of the church is striking due to the tower and spire, the interior is an absolute delight, so spacious and with such strong vertical lines that it seems to be reaching up to the sky. The sanctuary is flanked by a pair of chantry chapels.

To the south is the Markham chantry, founded in 1506 for Robert Markham and his wife Elizabeth. The exterior of the Markham Chantry boasts a pair of painted panels known as The Dance of Death.

The panels date to the early 16th century and depict a dancing skeleton on the left and a prosperous young man on the right, with his hand resting on his purse. The skeleton carries a carnation and is pointing to a grave. The message is clear; death comes to all, and all your worldly wealth will not put it off. 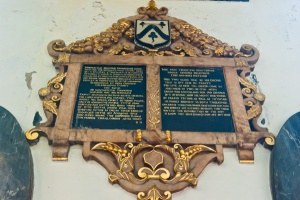 Almost directly opposite the Markham Chantry is a wall monument to Hercules Clay. Clay was the mayor of Newark during the Civil War when Newark was a Royalist stronghold. When the Parliamentary armies besieged the town, Clay had a dream that his hose was destroyed.

He dismissed the dream but it came again. Again he dismissed it, but a third time the dream returned. Thinking it a sign, Clay moved his family out of their grand house. Shortly after, on 11 March 1644, a mortar fell on the house and destroyed it.

In gratitude for his being spared Clay left 100 pounds to the town of Newark, with the provision that it be used to buy bread for the poor every year. The terms of his will specified that a special sermon be preached annually on the nearest Sunday to the date of his deliverance. The sermon is still preached to this day.

To the east of the Clay memorial is a wonderful east window full of 14th-century stained glass. There are six 'lights' or panels, with the 1st and 6th containing fragments of medieval glass fitted together like a giant jigsaw puzzle, while the centre four lights contain mostly original medieval glass, still intact. 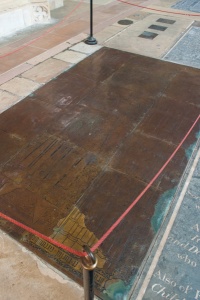 On the north side of the sanctuary is a second large chantry chapel, The Mering Chantry, also 16th century. Near the base of this chantry is the huge 14th century brass of Alan Fleming, who died in 1361. The Fleming Brass is one of the largest in England, measuring some 9'4" high by 5'7" wide. Fleming was a successful wool merchant, and in this case, his name denotes where he came from. The brass was made in the Low Countries, where Fleming must have been born. The inscription, now worn, reads

'Here lies Alan Fleming, who died in the year 1361, on the day of St Helena, may his soul rest in peace by the mercy of God. Amen. I believe that my redeemer liveth, and that I shall rise up from the earth on the last day, and shall again be clothed with my skin, and in my flesh I shall see God my Saviour, whom I shall view and not another, this my hope is laid up in my bosom.'

A confident man, it seems; confident in his resurrection. Well, not overly confident, for his image bears a scroll with the words 'Have mercy on me, O Lord, my God' in Latin. 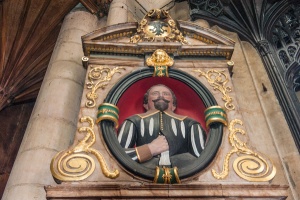 There are two wonderful 17th century painted and gilded monuments in the choir, one to Robert Ramsey (d. 1639). The choir stalls are beautifully carved as well, with amusing bench ends.

At the west end on the north aisle, high on the wall, is a wonderfully carved corbel head, showing the Trinty, with each 'face' sharing features (so that the central face shares one eye and nostril with each of his fellows).

I loved exploring this church. My abiding memory was the sheer awe-inspiring height of the interior, as if the building was an aeroplane trying to take off. The painted wall monuments are simply stunning, and the Fleming Brass has to be seen to be believed; I've never seen anything like it. The church is normally open Mon-Sat during business hours. If you get a chance to explore it, please do; its a gem! 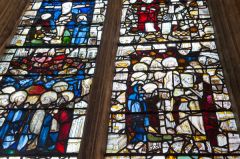 More self catering near Newark on Trent, St Mary Magdalene