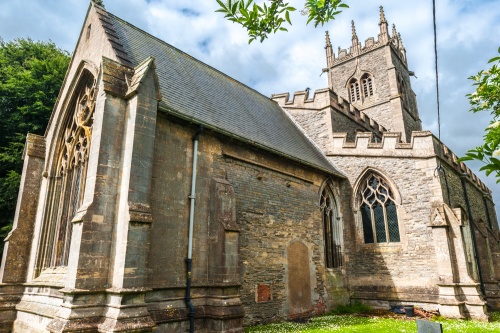 Chances are that you've never heard of All Saints Church in the Nottinghamshire village of Hawton. Yet it contains some of the most magnificent medieval sculpture in Britain, easily rivalling most cathedrals in sheer artistic exuberance and elaborate style.

The village of Hawton lies 2 miles south of Newark on the River Devon. The parish church of All Saints is a local landmark, visible over the fields for some distance due to its 5 stage tower topped with 8 pinnacles.

The village was recorded in the Domesday Book, when there were 2 churches mentioned, but the oldest part of the present church is the north arcade, which dates to around 1275 as does the north doorway. It may have been built by the De Houton family, the largest landowners in e area, or by the canons of Thurgarton Priory. 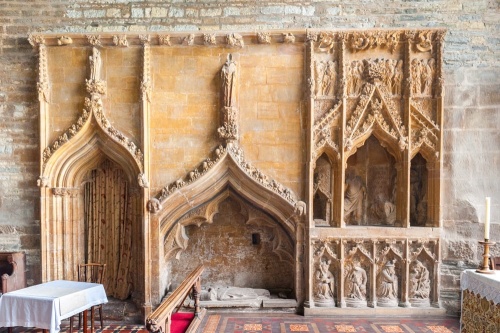 The De Houton family were followed by the Compton family, and there is a Purbeck marble grave slab for Sir Robert Compton (d. 1308) under the tower.

It was under the patronage of the Compton family that All Saints gained its great treasure, a superbly carved Easter Sepulchre in the north wall of the chancel, decorated with astoundingly intricate carvings of geometric designs, foliage, and miniature heads.

The carving is simply stunning, making this one of the best medieval Easter Sepulchres in England. The base of the Sepulchre is carved with four arched recesses. Within each recess is a figure of a sleeping soldier dressed in chain mail typical of the 13th century.

The Easter Sepulchre, sedilia (clergy seat) and the large east window may have been crafted by the same masons who worked on Southwell Minster, which is famous for its outstanding 14th-century sculpture. It seems likely that Hawton church was intended to become a collegiate church under the wing of the Minster. Architectural historian Niklaus Pevsner described the chancel of All Saints as 'One of the most exciting pieces of architecture in the country'. 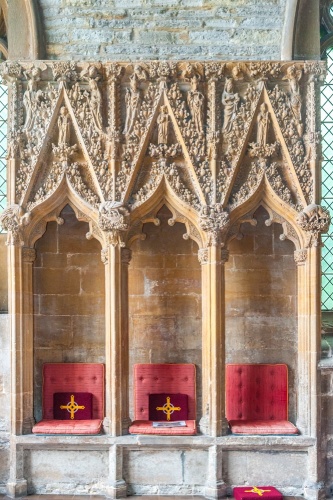 The Easter Sepulchre is one part of a trio of beautifully carved 14th-century niches in the chancel wall. On the far side is a priest's door that once led to a vestry or side chapel, set under an elaborate ogee arch, while between the doorway and the Easter Sepulchre is a founders tomb erected by the 3rd Sir Robert Compton in honour of his father, also named Robert, who died in 1330. The tomb niche is decorated with foliage, human figures and a Green Man. Sir Robert's effigy shows him clad in chain mail and bearing a sword and shield.

The Easter Sepulchre was lost for centuries under layers of whitewash and only rediscovered during a Victorian restoration (1843). Presumably, the whitewash was applied to protect the Sepulchre from destruction at the hands of iconoclasts during the Commonwealth period. The Victorians recognised just how impressive the Easter Sepulchre grouping was; a cast of the sculpture was exhibited at the Great Exhibition in 1851. 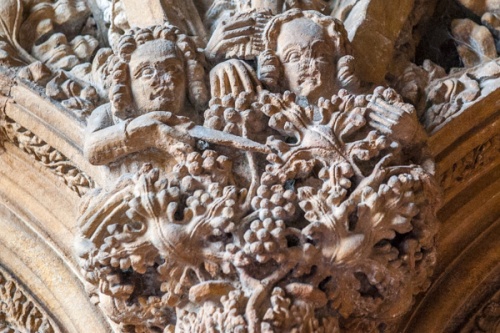 Opposite the Easter Sepulchre on the south wall is the three-seat sedilia, carved in the same style, with three exquisitely carved arches. Over the arches are the figures of St Edmund flanked by bishops, and over them are five saints being crowed by angels. Near the sedilia is a double piscina dated to the early 14th century (1300-1330), decorated with carvings of musicians amid foliage.

The combination of the Easter Sepulchre, the sedilia and the piscina makes the chancel of All Saints one of the most impressive ensembles of 14th-century sculpture in England.

The church was enlarged in 1482 by Sir Thomas Molyneux and restored in the late Victorian period by architect Charles Fowler. You can see the Molyneux coat of arms over the west doorway, and amusing carved faces around the exterior. The window west of the priest's door is decorated with carvings of a man making a grotesque face and a woman who appears to have a toothache. 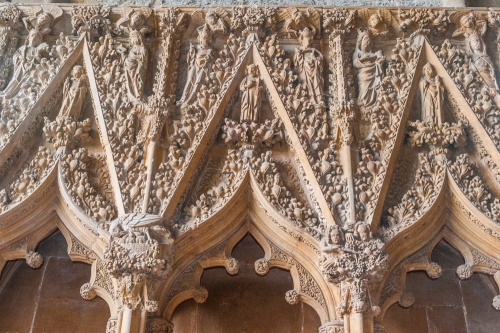 There are more small carved heads in the spandrels of the nave arcade.

Only a fragment of medieval glass has survived. It is in the window near the organ at the east end of the north aisle. The oak chancel screen dates to around 1500.

The church website has a list of keyholders, but we were fortunate to find it open when we visited. 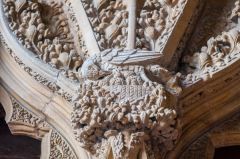 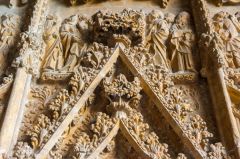 More self catering near Hawton, All Saints Church

More bed and breakfasts near Hawton, All Saints Church