HERITAGE HIGHLIGHTS:   St Michael's church, with its roots in the Saxon period 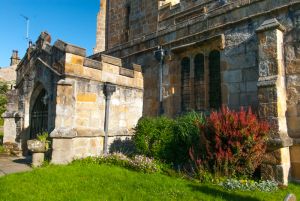 An attractive village in the southern Yorkshire Dales, Kirkby Malham has a small, triangular green and riverside walks along the Aire. A few miles away is the strange geological formation of Malham Cove. There are a number of attractive waterfalls in the area, and walking trails leading beside areas of limestone pavement.

Kirkby Malham's parish church is a building with a past - a very ancient past. The first church may have been built here near the River Aire as early as the 7th century. Certainly, it existed by the 9th century at the very latest. Curiously, there was no record of St Michael's in the Domesday Book of 1086, but the Book's coverage of Yorkshire is occasionally spotty.

By the late 12th century the advowson (the right to present the living) devolved to West Dereham Abbey, though it seems later to have been granted to Fountains Abbey, for the Fountains arms appear on the embattled tower. The present building is the result of a comprehensive rebuilding in the 15th century. The most obvious historic feature is an 11th-century font decorated with traditional Norman zigzag moulding.

We had the pleasure of staying in a holiday cottage for a week just a few miles away from Malham and visited the village several times. On one occasion I was driving through after visiting the limestone pavement at Malham Cove for a little sunrise photography. I was heading for our cottage when the sun came out and lit the tower of St Michael's church with a golden glow. I just had to stop and visit the church.

I met the vicar coming out of the church, and though he was about to lock up he kindly allowed me a few minutes to poke my nose inside the church, all the while chatting away about the village and the church. He was quite obviously proud of the church and its ancient origins, and of the village in general. Its that sort of friendly encounter that makes exploring the English countryside so enjoyable!

Malham is a quiet place, off the beaten track, which is part of the charm. It makes a great centre for exploring the Dales, especially if you enjoy walking, and is very well-placed for Malham Cove and Gordale Scar. 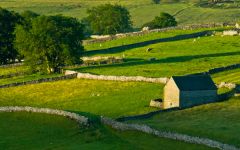 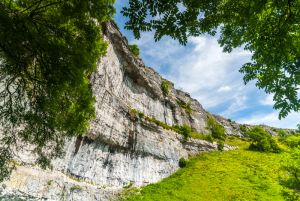 More self catering near Kirkby Malham >>