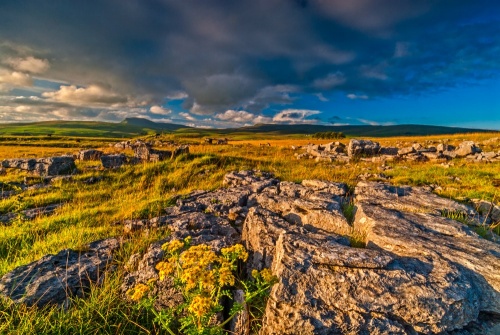 The Winskill Stones is a 74-acre nature reserve near Stainforth in the Yorkshire Dales National Park. The reserve is known for its picturesque limestone pavement, which supports a colourful array of plant life. The reserve offers stunning views north to the famous Three Peaks of Whernside, Pen-y-Ghent, and Ingleborough.

The nature reserve is owned by the charity Plantlife International, who purchased the site after it was threatened by removal of limestone paving for gardening design. People were taking away chunks of the limestone pavement to make rockeries.

The popular TV gardener and writer Geoff Hamilton launched a campaign to save the limestone pavement and raised public awareness of the problem. When Hamilton died the Plantlife charity stepped in, bought the land, and created a nature reserve in Hamilton's memory. 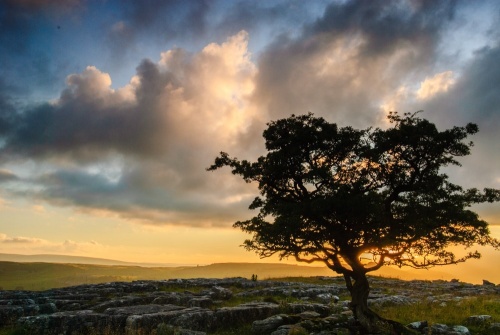 The area of preserved limestone pavement is relatively small, but the setting is incredibly picturesque and is a favourite destination for photographers. And most photographers capture views with the solitary hawthorn tree that graces many of the images accompanying this article.

Aside from the limestone pavement, the Winskill Nature Reserve covers a large area of limestone pasture where purple orchids and cowslips bloom in spring. Later in the year, you will find large areas of mountain pansies and carline thistles.

The most colourful flowers can be found on limestone ledges, well away from grazing animals. Here you can spot meadow saxifrage and mossy saxifrage, horseshoe vetch, rock-rose, scabious, maidenhair fern, and kidney vetch. 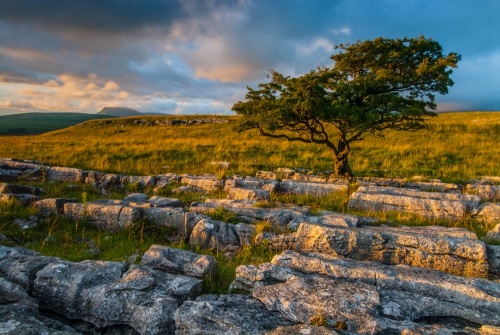 A solitary hawthorn tree grows amid the limestone pavement

Spring sandwort and limestone bedstraw peep out from areas of limestone pavement and you might catch a glimpse of wild thyme. 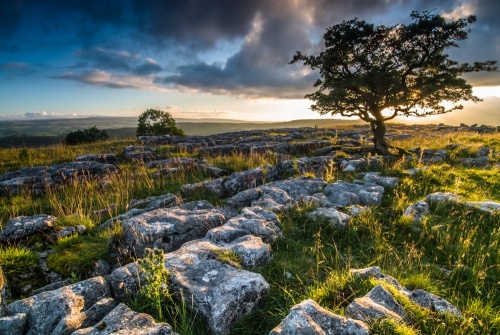 What is limestone pavement?

Limestone is a sedimentary rock formed from millions of minute shells and skeletons of ancient sea creatures. Over millennia the organic material is compressed into hard stone. The alkaline limestone is weathered by acidic rainwater seeping into cracks.

Over time the rainwater erodes the stone, weathering it to form deep fissures that divide the surface area into something that resembles erratically-shaped paving stones. The slabs of stone are known as clints and the fissures are called grykes. These fissures may lead to underground sinkholes and hidden caves. 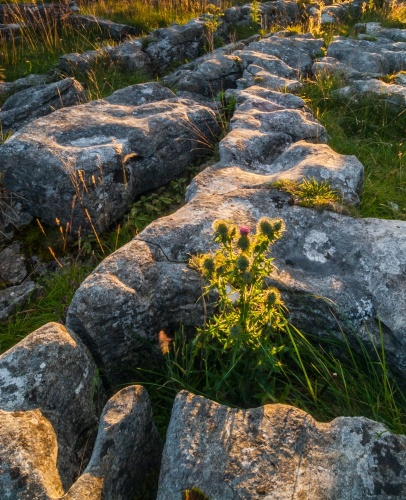 Thistle grows amid the limestone pavement

The Winskill Stones are on a minor road between Langcliffe and Malham, about one mile south-east of Stainforth and two miles north-east of Settle. There is parking for several cars in a layby near the start of the footpath to the Winskill Stones. Just walk down the minor opposite the layby and you will see a trail up onto the fell. It takes no more than five minutes to reach the reserve from the layby.

Self Catering near Stainforth