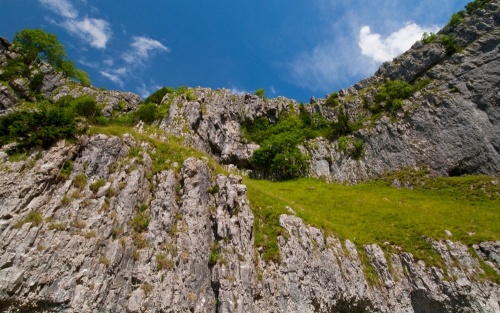 Gordale Scar is a dramatic gorge formed by the action of glaciers, with striking overhanging cliffs and a pair of waterfalls along Gordale Beck. The cliffs, which reach over 100 feet high, are made of limestone, scored by glacial action.

The Scar is reached by a level path from the road, which leads through an area of tumbled rock and scree. The cliffs rise up slowly on either side until they seem to blot out the sun.

Then you reach an area of tumbled boulders, split by a waterfall, where the cliffs are undercut to form an overhang high above. The path rises sharply around these boulders to reach a dramatic upper waterfall.

From Gordale the beck runs southwards out of the ravine to another waterfall at Janet's Foss, and then downstream to join Malham Beck and form the Aire River. A mile or so to the west is Malham Cove, a dramatic horseshoe-shaped cliff.

Gordale Scar was painted by JMW Turner and eulogized in a poem by William Wordsworth. 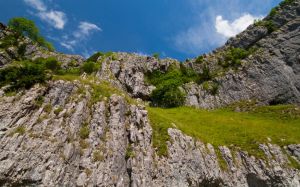 More self catering near Gordale Scar >>