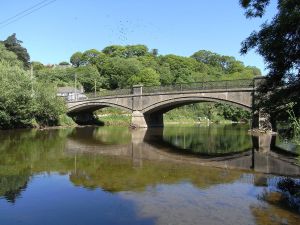 A lovely historic village of thatched cottages, set beside the River Taw in northern Devon, 7 miles from the market town of Barnstaple. Umberleigh boasts a medieval three-arched bridge across the Taw and fine walks along the riverside.

From the bridge, you can take beautiful walks along the River Taw towards Barnstaple. There is private fishing on the river if you enjoy a spot of angling, and 4 pubs within a few miles if you prefer a different sort of relaxation!

The manor of Umberleigh was recorded in the Domesday Book of 1086, though it is likely that King Athelstan had a royal palace here in the 10th century. Part of the estate was a nunnery, given by William the Conqueror to the abbey at Caen, in Normandy. The manor house, a Georgian farmhouse known as Umberleigh House, stands on the site of the Norman nunnery.

Beside Umberleigh House, which is not open to the public, stands all that remains of Umberleigh Chapel, a 13th-century chapel dedicated to the Holy Trinity. Only a single wall of the chapel remains, built into a farm building.

Medieval monuments from the chapel were removed to Atherington church, including the 13th-century effigy of a knight thought to be Sir William de Champernowne. In a curiously appropriate historical twist, the original church at Atherington was founded by King Athelstan himself.

Umberleigh rail station lies on the famous Tarkas line, lining Exeter and Barnstaple. The line is named for Henry Williamson's popular novel about Tarka the Otter, and the journey offers wonderful views of the Devon countryside.

Just north of the village on the B3227 is the Church of the Good Shepherd, a picturesque 19th-century church built for workmen on the Great Western Railway as a chapel of ease for Chittlehampton.

The Cobbaton Combat Collection at Chittlehampton, near Umberleigh, is a museum housing military vehicles from the times of the Boer War to the present day. The collection began as a hobby but grew to the point where it required special premises. It now houses over 50 combat vehicles right up to the Gulf War. 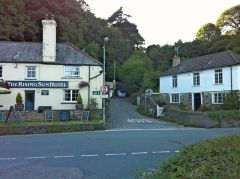 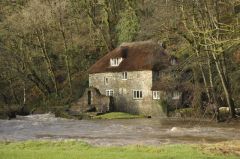 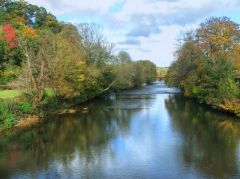 About Umberleigh
Address: Umberleigh, Devon, England
Attraction Type: Village
Location: At the junction of the A377 and the B3227 roughly 7 miles south east of Barnstaple
Location map
OS: SS 6090 2355
Photo Credit: Lobsterthermidor, licensed for reuse under the Creative Commons Licence

More self catering near Umberleigh >>

More bed and breakfasts near Umberleigh >>