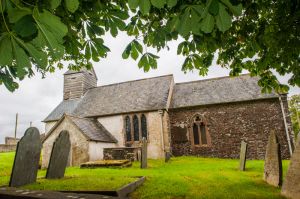 A delightful medieval church in an isolated position above the Meol Valley, St Peter's stands in a farmyard, far from the nearest village. The church dates to at least the late 13th century, and possibly earlier.

Satterleigh once formed part of the Saxon estates of Chittlehampton. The name comes from the words for 'woodland of robbers', an indication of just how remote and unsettled this area used to be. It isn't so unsettled today, but it certainly still feels remote!

The church is very simple, consisting of a nave, chancel, and south porch, with a wooden bellcote above the west gable of the nave. We do not know exactly when the church was built, but in 1435 Bishop Lacy granted an indulgence for anyone helping to build a church at Satterleigh, though this was probably a rebuilding of an earlier building that had fallen into disrepair.

The roof features a set of carved wooden bosses. There is a Jacobean carved pulpit with a canopy, and a medieval font. A homely touch is provided by neat rows of wooden hat pegs used by parishioners in times past. The font is 15th century, as are some of the carved wooden bench ends. On the north nave wall, over the font, is painted 18th-century text, and over the south doorway is a royal coat of arms dated 1726. 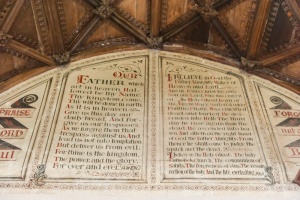 The oldest memorial in the church is to Robert Hacche, who died in 1699. This is fixed to the south wall, as is the stone which was originally the entrance to the vault of Henry Byrne, who died in 1821.

Other features include the base and shaft of an ancient cross in the churchyard, and the timber bell-frame, built around 1600. Spare a glance for the lych gate at the entrance to the churchyard, built as a memorial to those who lost their lives in the First World War.

Getting to the church isn't straightforward. The Churches Conservation Trust website is a bit vague on directions. If you simply set your satnav to the postcode you will end up in the wrong place. The church is up the driveway leading to Satterleigh Barton farm. It is signposted from one direction, but not the other.

I drove past the drive before I realised that there was a signpost facing the other way, so I had to turn around and drive back. There is no obvious place to park nor any signs at the farm itself, but the church is easy to spot amid the farm buildings, tucked in behind a large barn.

The first really interesting feature greets you before you even enter the church. The south doorway is a gem; a battered oak door showing the passage of centuries. As you enter you see on the north wall a Georgian wall painting of a Biblical text, above the 15th-century font. I loved the row of hat pegs on the wall of the chancel; another reminder of the 18th century. Another highlight for me was the pulpit with tester; a beautiful piece of Restoration woodwork.

The location, tucked away behind farm buildings, is part of the charm of this lovely historic building. There is nothing truly outstanding about St Peter's church, but the combination of the rural setting and the Restoration furnishings makes it a wonderful historic gem. 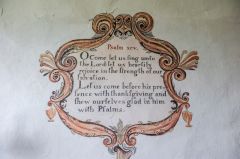 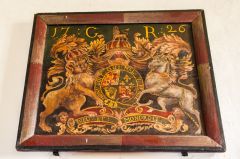 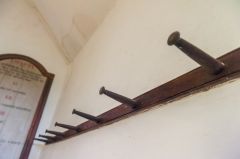