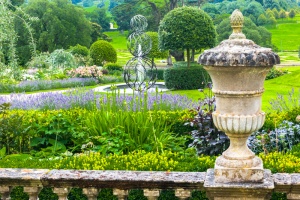 The Millennium Garden at Castle Hill

Castle Hill Garden is a glorious 18th-century landscape garden surrounding a Palladian mansion built in 1730 for the Fortescue family. The garden is dotted with neo-classical temples and follies, with the mansion acting as a backdrop. Castle Hill is, without doubt, one of the finest historic gardens in south-west England.

In 1454 the Fortescue family established a manor at Filleigh, near South Molton. It was not the main family residence; that was at Weare Giffard, 12 miles distant. The medieval building was replaced with a Tudor house, which in turn was remodelled in 1684 by Arthur Fortescue.

In 1730 a new Palladian house was built by Hugh Fortescue, 14th Baron Clinton. Fortescue was inspired to build in the new Palladian fashion popularised by Lord Burlington, and indeed he consulted Lord Burlington on the design of his new mansion and hired Burlington's favourite mason, Roger Morris, to oversee the project. 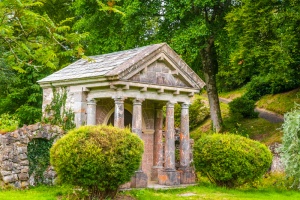 Fortescue, later the 1st Earl of Clinton, surrounded his elegant new house with a superb landscape garden, integrating carefully planted woodland gardens with formal terraces and a walled garden near the house. To create space for the landscape garden Fortescue had the parish church pulled down and rebuilt a mile away.

Though it is nominally called a 'garden', Castle Hill can perhaps more accurately be described as an artistically arranged landscape, with paths winding through plantations of trees, opening out to sudden vistas, and views of neo-classical follies, statues, and temples. The garden was not designed as a whole, but was added to over time, with new temples springing up over the following century.

One of the most striking follies is a Sham Castle, built in 1746 on a hilltop overlooking the house. The castle may have been inspired by Sir John Vanbrugh, architect of Blenheim Palace.

Though it is now an empty shell, the castle was used for a time as a banqueting hall, then a residence for a couple who looked after tame pheasants on the estate, and was later a residence for a huntsman. From the castle you can see Exmoor, Dartmoor, and Lundy Island on a clear day.

On the same axis as the Sham Castle is a triumphal arch, 1/2 mile away on a hilltop site, facing the castle across the valley. 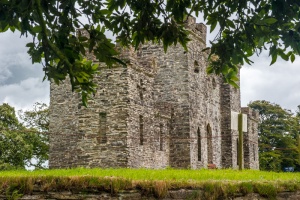 My favourite part of the garden is the riverside walk to the north west of the house. The trail runs beside a small stream, a tributary of the River Bray, until it reaches a decorative rustic bridge, called Ugley Bridge. Set intio the bank beside the bridge is a small groot called Sybil's Cave, while across the stream is Satyr's Temple, a neo-classical summerhouse.

From the Satyr's Temple trails wind back and forth up a sloping hillside, through beautiful plantations, passing a statue of Pan, a roadside cross, and the Sunset Temple before reaching the Sham Castle on the hilltop.

In spring this area is lushly coloured with white, red, and pink camellias, as well as early rhododendrons and magnolias. Later in the year, the woodlands are a riot of colour as snowdrops and primroses carpet the ground beneath stands of lofty beech trees. By May the air os full of scent from azaleas and later rhododendrons. 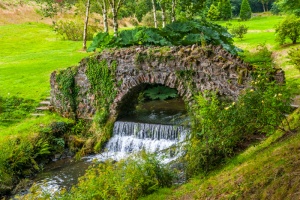 This is a place where you can wander at a leisurely pace through wonderfully open woodland, with glimpses of the Palladian mansion further down the hill.

Nearer the mansion are lushly planted formal gardens centred on a peculiar water sculpture, and the walled garden; a mix of kitchen and ornamental garden with a fish pool populated by exotic, coloured fish.

I loved visiting Castle Hill, I came expecting a more traditional garden, but the landscaped woodland was a delight, and the neo-classical statues and follies created a fascinating historic atmosphere. The colourful formal gardens near the house make a lovely contrast to the landscape gardens, and the sumptuous mansion acts as a backdrop for the gardens from all angles.

A final touch of delight enhanced my visit. As I was walking along the terrace in front of the house an antique Rolls Royce car pulled up the drive and parked directly in front of the house. It was as if I'd steeped back 100 years in time to the age of the country house. It turned out the car was there for a photo shoot, and the owner just wanted to use the mansion as a background for his vintage automobile.

One final note:
I found Castle Hill through the Historic Houses Association handbook (I've been a member for years). I assumed that because it was listed in the HHA handbook that I'd get free entry to the gardens. Oops! No, I had to pay full price. The person at the service kiosk was apologetic - she'd obviously had the same confusion arise before - but it was a bit of an unexpected surprise that the garden was listed in the handbook, but not part of the free admission scheme. So, if you're an HHA member, take note and bring cash! 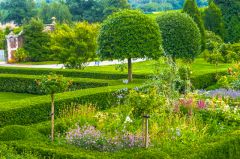 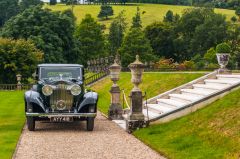 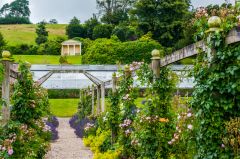 Self Catering near Barnstaple