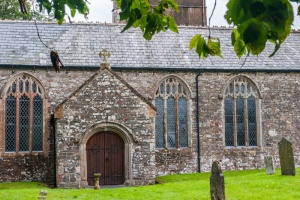 Holy Trinity church was begun around AD 1150, probably on the site of an earlier Saxon building. The 12th-century church probably consisted of just a nave and chancel. Sometime around 1250 the striking west tower was added, and around 1450 the church was expanded to create the building we see today, with a south aisle. The first thing you notice is the sheer height of the south porch, which reaches, and merges with, the embattled nave roofline.

Historic highlights include a Norman font and wagon roof over the nave decorated with beautifully carved Tudor bosses. The south aisle roof beams terminate in a series of 36 carved wooden angels.

Carvings of Green Men can be found throughout the church, including one above the south door, partly obscured by chicken wire installed to deter birds. The dor itself is marked with musket holes, believed to have been fired by Parliamentary soldiers during the Civil War. 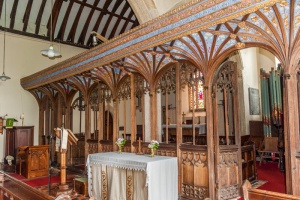 The pride of Burrington's church is the striking Tudor screen, which must surely be one of the finest in Devon. The screen is not only beautifully carved, but vividly painted in a red, blue, and gold colour scheme. There are numerous Tudor symbols carved on the screen including the pomegranate, symbol of Catherine of Aragon, Henry VIII's first wife.

The font is probably 12th century, though it has rather obviously been recarved. It is very worn, with a scalloped base to the bowl, and held together with an iron band. The altar rails are Jacobean and excellent examples of 17th-century craftsmanship. They are carved with alternating twisted and straight balusters.

On the north wall of the chancel is a monument to Rev. James Buckingham, who served as Rector of Burrington for 50 years and died in 1855. On the south wall is a memorial to Ann Hole (d. 1769) and her father Nicholas Hole, vicar of Burrington, who died in 1797.

Beneath the piscina is a tablet to William Harvey, vicar for 50 years, who died in 1665. There are further 18th century memorials to William Pennicott of London, a surgeon who died in 1747, and to John and Mary Babbage (d.1799).

Outside the church look for bosses above the window west of the porch. The carved heads wear headdresses common in the reign of Henry VI. Outside the choir door is a fragment of carving depicting a strange head with bulging eyes. Near the tower is a poignant memorial to five children of the Woolway family who died within six days of each other from diphtheria.

Holy Trinity is open daily, and is well worth a visit, especially to see the exceptional Tudor screen. 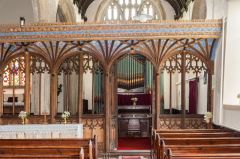 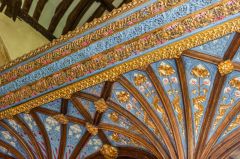 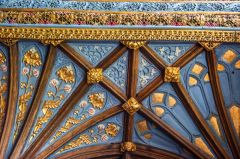 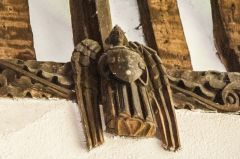 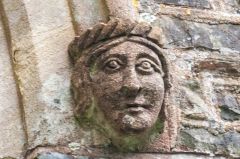 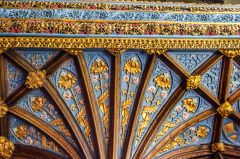